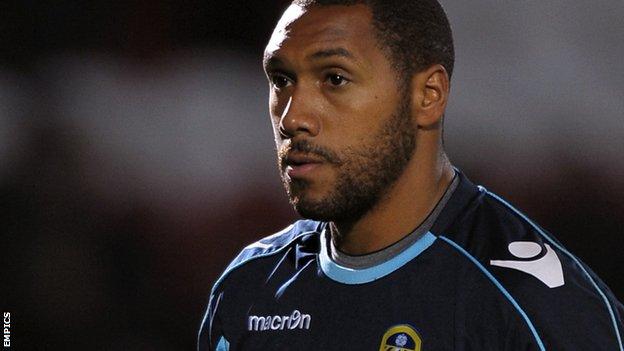 Wales goalkeeper Jason Brown has backed manager Chris Coleman, insisting it will be Scotland boss Craig Levein who will be under most pressure when the two teams meet in Cardiff on Friday.

Coleman has yet to win since becoming Wales boss in January.

As players, we are fully behind the manager.

"The only manager under pressure is Craig Levein," said Brown. "I live in Scotland. You see the press there. You hear the supporters."

Wales have made a bad start to qualifying for the 2014 World Cup and are bottom of Group A after losing 2-0 to Belgium and 6-1 to Serbia.

But Scotland have only drawn their first two games.

Brown added that Levein's decision to recall striker Steven Fletcher "illustrates" the pressure the Scotland manager is under.

Fletcher was left out of a succession of squads after making himself unavailable for a game against Northern Ireland in February 2011.

But Levein has opted to pick him for the games against Wales and Belgium after being convinced of his dedication to the cause.

"The manager stuck by his guns and been stubborn for a long time," said Brown. "All of a sudden, he has gone back on that."

Brown insists it is not "win or bust" for Wales on Friday and says Coleman, who took over as manager following Gary Speed's death, has the full backing of the Wales squad.

"He has taken over in extremely tough circumstances," added Brown. "Gary Speed was so influential on the squad with the players.

"The gaffer, since he has come in, has been fantastic. He has not gone about things the wrong way in terms of changes.

"I've seen some managers when they come in make a total change and people are up in the air. It's not that."

Coleman has yet to win a game as Wales boss, suffering defeats to Mexico and Bosnia-Herzegovina before the qualifying losses to Belgium and Serbia.

"We have had some tough games," said Brown. "Mexico are a top-10 team in the world. Look at Bosnia, a very good team.

"The only one we can say we have let the manager down was Serbia. Belgium was tough circumstances.

"So as players, we are fully behind the manager. To be fair, everyone has just got on with it, nothing's been made of it. The manager makes decisions. That's what he is, the manager. We stick by whatever he does. Whatever team he picks we are all one good unit. We support that."

With injury ruling out first-choice goalkeeper Wayne Hennessey and deputy Boaz Myhill, Brown has emerged as favourite to play ahead of Crystal Palace's Lewis Price and Owain Fon Williams of Tranmere Rovers and is keen to repay the manager's faith.

"Hopefully I can start the game on Friday," added Brown. "Obviously, I'm hopeful because I have been in the last two squads and out of the three of us I was the last one to play, against Mexico.

"I'd like to think I acquitted myself well so hopefully that should stand me in good stead. If it's not me, I will be cheering on and trying to help."