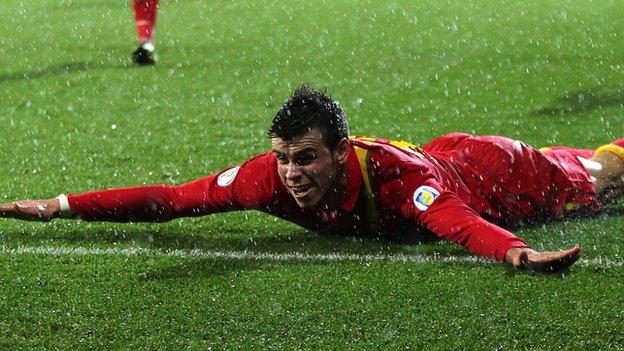 James Morrison's predatory strike, seizing on Steven Fletcher's flick, had seemed set to give Scotland their first Group A victory.

But when Bale was clipped by Shaun Maloney in the area he picked himself up to coolly convert the penalty.

Then with three minutes remaining the Tottenham winger unleashed a brilliant 25-yard left-foot shot that curled into the top corner.

It was a dramatic ending and the result eases the pressure on Wales boss Chris Coleman but leaves his Scottish counterpart Craig Levein facing an uncertain future.

Levein had attracted criticism after Scotland opened with two home draws against Serbia and Macedonia while Wales had started with a defeat to Belgium in Cardiff and a 6-1 thumping in Serbia.

But after Coleman avoided becoming the first Wales manager to lose five successive games at the start of his tenure he can now face Croatia on Tuesday with renewed heart.

The Scots, who had not won in Cardiff since 1983, were boosted by the return of two Fletchers to the side.

Manchester United midfielder Darren had been out for 11 months with a chronic bowel complaint but returned to captain Scotland, while striker Steven - in hot scoring form for Sunderland - was back having buried the hatchet with Levein after a two-year exile.

The two players were to the fore as Scotland took an early grip on the game, Darren Fletcher sitting just in front of his defence and spreading the ball wisely, while his striking namesake lurked on the shoulders of the Welsh defenders.

A series of short free-kicks, with Gary Caldwell heavily involved, gave Wales some nervous early moments, but when they broke clear Bale flashed a volley a couple of feet above Allan McGregor's goal.

The Tottenham winger had started on the right and moments later Bale went even closer after being picked out by Chris Gunter's lofted pass down the flank.

Bale cut back inside Daniel Fox and unleashed a curling left-foot shot that went just wide of the far post.

Scotland's best chance of the opening quarter fell to Alan Hutton, but the full-back's speculative shot caused Lewis Price no discomfort as it sailed high over his bar.

The adventure from Scotland's full-backs - Hutton and Fox - did leave spaces for Wales to counter into though.

Aaron Ramsey, stripped of the Wales captaincy in favour of Ashley Williams, surged upfield before playing in Joe Allen on the left.

The Liverpool midfielder brought the ball on to his right foot and only a fine sliding charge from Caldwell stopped the goal-bound shot.

Bale continued to threaten and outpaced Fox to curl a cross into Morison on the back post.

The changing face of Group A

The Norwich striker had space and time to pick his spot but sent his header back across goal past the outside of the post.

As several Wales players shook their heads in disbelief, McGregor thumped the ball long and high downfield where Steven Fletcher was alive to the opportunity.

The Sunderland striker outmuscled his marker to flick the ball into Morrison's path and the West Brom man accepted the invitation to bury the ball low past Price.

Scotland could have doubled their lead when the in-form Steven Fletcher scuffed his shot into the chest of a grateful Lewis with the goal at his mercy.

In a breathless last five minutes of the half, both sides should have added goals.

First Allen blazed over after Bale had produced another barn-storming run down the right, then at the other end Morrison could not keep his shot down after being picked out by Hutton.

Levein sent on Charlie Adam in midfield for Scott Brown after the break, while opposite number Coleman stayed his hand.

Darcy Blake had been given a torrid time by Steven Fletcher in the first half, but Coleman had no other specialist centre-backs in his injury-hit squad.

The Wales boss was also without the suspended James Collins and will also be without Ramsey for Tuesday's trip to Croatia, after the Arsenal midfielder was booked for a clumsy lunge on Hutton.

Morison had got little change out of Caldwell and Christophe Berra, so Barnsley's Craig Davies came on for his first Wales appearance in almost five years.

While Davies added some extra muscle, Scotland continued to threaten and only a fine reaction save from Price denied Morrison his second after a deflection fell kindly.

Ramsey then wasted another gilt-edged Wales chance after racing on to Ben Davies' clearance, shooting wide when through on McGregor.

Steven Fletcher thought he had doubled Scotland's advantage but an eagle-eyed referee's assistant ruled the ball had just gone out before the striker bundled home.

The brilliant Bale then earned Wales a lifeline, driving into the area before being clipped by Maloney.

The Spurs wide man grabbed the ball and sent McGregor the wrong way to level the scores.

Then with time running out Bale was allowed to run at the defence and, while falling back, unleashed an unstoppable left-foot curler that sailed into the far top corner.