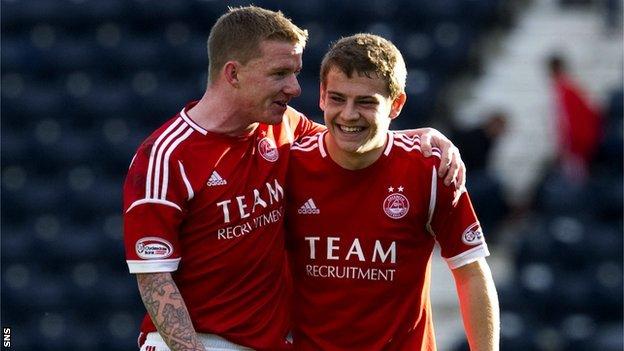 Aberdeen manager Craig Brown disagreed with Kilmarnock counterpart Kenny Shiels' view that the Ayrshire side did not deserve to lose to the Dons.

The Reds recovered from losing a third-minute Ryan O'Leary goal to beat Killie 3-1 at Rugby Park.

"I like Kenny and respect him but I have to disagree with him," said Brown.

"I think we deserved it. To go in one down was astonishing because I felt we were the better team in the first half. In the second half it was pretty even."

Aberdeen's second-half comeback was delivered by goals from Gavin Rae, Niall McGinn and Scott Vernon and the result means Brown's side are unbeaten in 10 matches in all competitions.

Now sitting in third spot in the Scottish Premier League on 14 points from nine games, their last league defeat was to Celtic on the opening day of the season.

"We are delighted that we managed to get another away victory," added Brown.

"To get a goal as early as that gives a team a great lift and we had to show a lot of character to fight back and stay in the game in the first half and I think we more than did that.

"Two wins in a row fairly propels you up the SPL.

"We are well aware if we don't win we drop down because things are so tight in the SPL."

Brown put Aberdeen's run down to the experience of his players.

He told BBC Scotland: "It's the personnel. If you sign the right players you get a response from the good players.

"We have experience where it matters.

"Take the two centre-backs - Mark Reynolds before coming to Aberdeen had played 166 games for Motherwell and then he went to England. He is very experienced.

"And in midfield Gavin Rae and Stephen Hughes, who was outstanding today, are hugely experienced.

"Round about that we have young players of good quality. We are lucky at the moment - we have a good blend of experienced players and young players."

Brown paid tribute to 18-year-old winger Ryan Fraser, whose name was chanted by the travelling fans at Rugby Park.

"I think he has great potential. He has a lot to offer," said the manager.

"He's a young, modest guy and he is not getting carried away.

"He doesn't lie down unnecessarily. He got a bad knock on the calf and that was the only time he was down. He is an exciting young player.

"I think Kilmarnock have one too. The boy Chris Johnston came on and I thought he was the same, a Ryan Fraser for Kilmarnock.

"The more of these young players we get in Scottish football, the more fans will come and watch us."