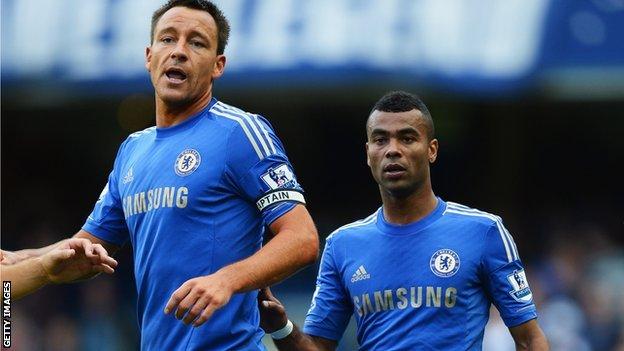 Cole, 31, tweeted after an independent FA commission queried his evidence in the hearing which found team-mate John Terry guilty of racial abuse.

"We've got a social media policy at the club," said Di Matteo.

"If you are going to criticise football the one thing I would completely agree with is there are certain players out there, and I am not particularly picking on Ashley Cole, that forget some times that they represent an employer, industry and governing body which is the FA."

"There's going to be a disciplinary process - action - against the tweet and that's how I'll leave it."

He later deleted it, although Chelsea are still set to take action and he could face a charge from the FA.

Cole is set to meet up with the England squad on Monday for the forthcoming World Cup qualifiers against San Marino and Poland.

However former England striker Alan Shearer has called for Cole to be banned as punishment for his outburst.

Shearer told the BBC's Match of the Day programme: "I think the FA can put a big statement out here by actually not fining him but actually banning him on Friday against San Marino."

Terry was found guilty of racially insulting QPR defender Anton Ferdinand during a match between the sides last season by the FA independent commission.

In the written report detailing the ruling, Cole's evidence supporting his team-mate was said to have 'evolved'.

Despite the controversy, Cole played in Chelsea's 4-1 win over Norwich on Saturday and later tweeted: "Another great result, and some great football played, and once again I want to thank the #cfc fans, amazing."

Terry also played in the victory and Di Matteo insisted he had no hesitation in picking the duo.

"I judge them on what I see on the training ground - pitch - and in the games," he said.

"When they're there, they are fully focused and professional and that's how I pick my team."

Di Matteo did not condemn the use of social media by players but did warn there would be repercussions if it was not used correctly.

"I'm in favour of social media entities," he said. "They just have to be used sensibly.

"But I'm not against it. It's in the world we live in and, as long as it's used with responsibility, I think it's a good way to communicate."

He added: "If they breach a rule that we have, there are going to be some consequences.

"We have rules, and if they break them then there is a consequence."