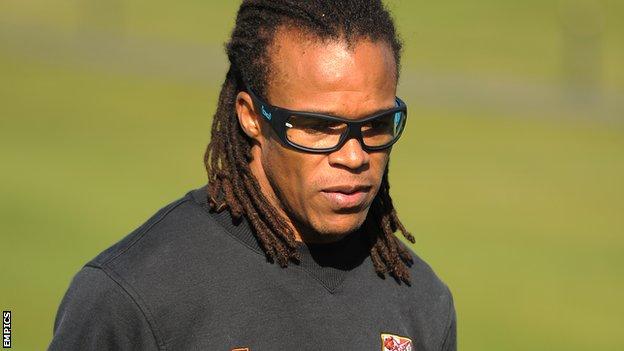 Barnet's new joint-head coach Edgar Davids saw the size of the task facing him at Underhill as Plymouth extended the Bees' winless run to 14 games.

Davids, who did not play, saw the Bees go down within two minutes, Rhys Griffiths scoring from the spot after Luke Young fouled Mark Byrne.

Maxime Blanchard then headed in from close range to double the lead, before David Stephens fired in for the Bees.

A Paris Cowan-Hall header and a Young free-kick compounded the Bees' misery.

The result means Barnet are still without a win this season in all competitions, and now lie five points adrift at the bottom of the Football League having lost nine of their first 12 fixtures.

And there was further bad news for Davids and his fellow head coach Mark Robson, as former Netherlands striker Collins John limped off after 15 minutes on his Bees' debut.

Plymouth meanwhile move up to 18th in League Two, after securing just their third league win of the season.

"There were some spells where we kept the ball and we played, and we got some good crosses in.

"Those are the things that have to be more consistent, and not have to be incidental but permanent for us.

"It was not a very good performance, but I saw some good spells and we have to build on them.

"First you have to analyse the situation, and then dissect the problems.

"We are definitely going to look closer at the squad and see how we can improve. If that means we have to have some changes, then we have to do those."

"We're delighted that we got four goals away from home and three points.

"I didn't think it was a penalty to be honest, but sometimes they go for you.

"We got a little bit sloppy when Barnet got their goal from a corner, but I thought we dealt with the game professionally and in a great manner, especially in the second half.

"We'll be looking forward to the game next week, making sure we keep that confidence that we've gained today."