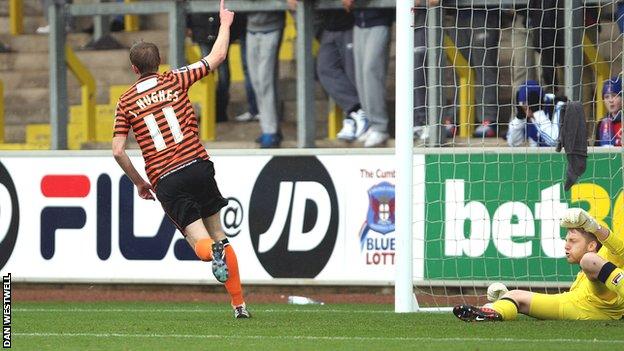 Jeff Hughes put the Magpies ahead when he ghosted in to head in Alan Judge's cross from close range.

Jordan Stewart's low cross from the left was touched in by Neal Bishop to give Notts a 2-0 half-time lead.

Former Carlisle striker Francois Zoko made it 3-0 from 12 yards out and Jamal Campbell-Ryce netted a penalty after he was fouled by Chris Chantler.

The home side's best efforts fell to Danny Livesey, who scraped the bar, and Joe Garner, who was denied at close range by Bartosz Bialkowski.

The only disappointment for Notts was a first-half injury to Judge, who limped off in the 35th minute.

"I say that dressing room is all about me, Graham Kavanagh, Neil Dalton and Tony Caig and 18 players.

"I'm not going to stand aloof when we win games and I'm certainly not going to hide behind players when we lose games."

"I've got faith, belief and a system of play that the players have bought into. I am about building for the future.

"It would have been very easy to show disappointment after the defeats last week.

"The best way to show your disappointment is by your next performance and I think we got that today."