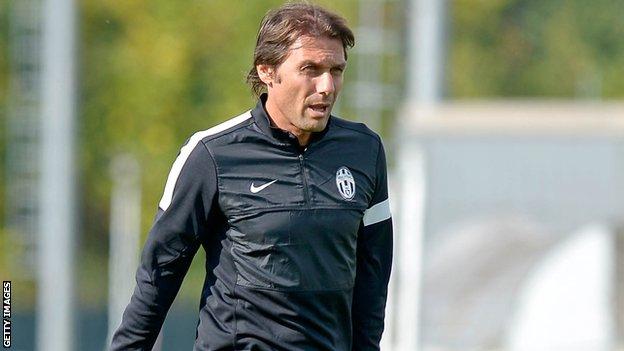 Juventus coach Antonio Conte's ban for involvement in a match-fixing scandal has been cut from 10 months to four by an Italian sports tribunal.

The Italian Olympic Committee's decision means the 43-year-old can return to the bench on 9 December.

Conte was banned in August for failing to report alleged match-fixing in two games when he was coach of Siena during the 2010-11 season.

He was later cleared in relation to one of these two matches.

Conte led an unbeaten Juventus side to the Serie A title last season, his first in charge, but had been set to miss the whole of the current campaign.

He took his case to the Italian Olympic Committee, the country's final appeal court for sports disputes, after being handed his original ban by the Italian Football Federation.

Under the terms of his suspension, he is excluded from the Juventus dugout and dressing rooms on matchdays, but can take training during the week.

Technical director Massimo Carrera is leading the team on matchdays during Conte's ban.

Conte was originally accused of wrongdoing over Siena's matches against Albinoleffe and Novara two seasons ago.

He was subsequently cleared over the Novara match, but remains guilty of failing to report alleged corruption regarding the Albinoleffe game.

By the time he returns, Conte will have missed 15 Serie A matches and all six of Juve's group games in the Champions League, including both Group E meetings with Chelsea.

Conte's assistant at Siena and Juventus, Angelo Alessio, had his original eight-month ban reduced to six months on appeal.

The bans handed to Conte and Alessio relate to the wide-ranging investigation into the 'Calcioscommesse' scandal, which has seen more than 20 Italian teams examined as part of a match-fixing inquiry.