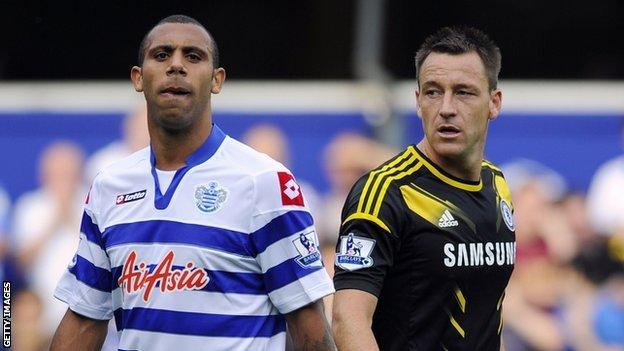 John Terry's defence against claims he racially abused Anton Ferdinand was "improbable, implausible, contrived", according to the Football Association panel which found him guilty.

The FA's 63-page report explaining why Terry was banned for four games and fined £220,000 was published on Friday.

The panel said the Chelsea captain, 31, "is not a racist" but was "satisfied" his comments were used as an insult.

Terry, cleared in court of abusing Ferdinand, has 14 days to appeal.

"The written judgement makes for 63 pages of highly unpleasant reading, not just for John Terry, but also for Ashley Cole and Chelsea club secretary David Barnard over the reliability of their evidence.

"Like most people who have seen the footage of Terry's notorious altercation with Anton Ferdinand, the panel came to the conclusion that his explanation - that he was merely saying the abusive words in the form of a question - simply didn't add up. Their view that Terry's defence was 'improbable, implausible and contrived' is damning.

"Unlike the magistrate in July's court case, the panel weren't restricted by the need to find Terry guilty beyond all reasonable doubt. They could simply apply common sense, and having done so, they concluded that on the balance of probabilities he both racially abused Ferdinand, and then lied about it.

"The justification for banning Terry for just four games, and fining him a week's salary will divide opinion, as will the panel's belief that he is not a racist.

"But that conclusion is also crucial because it enables his employers Chelsea to back him. Others, however, will point to the club's decision to ban a fan for life in May for racially abusing former Blues striker Didier Drogba.

"Terry can insist he's innocent, he can appeal, he can play on, he can refer to his court acquittal, but, for many, this written judgement ensures his reputation will always be stained beyond repair."

Chelsea would not comment on the report, a spokesman saying: "As we said last week, we recognise that John has the right to appeal. In view of this, it would be inappropriate for us to comment further on the matter at this time."

The incident between Terry and Ferdinand occurred during in a Premier League game at Loftus Road on 23 October, 2011.

It was alleged Rangers centre-half Ferdinand swore at Terry and made reference to Terry's reported affair with the ex-partner of former team-mate Wayne Bridge.

Terry is then said to have described Ferdinand as "black" and used extreme sexual swear words.

Terry's case was that he had only been repeating words he thought the Rangers defender had accused him of saying.

However, the independent commission's report said parts of Terry's defence were "improbable, implausible and contrived".

It added: "His repetition of words that Mr Terry claims were said to him first by Mr Ferdinand is implausible if they were really intended to be a robust denial.

Terry had been cleared of racially abusing Ferdinand in a high-profile court case in May.

In court, the criminal burden of proof was "beyond all reasonable doubt". However, the independent commission used the lesser civil test, that of "on the balance of probabilities".

"The commission is quite satisfied that there is no credible basis for Mr Terry's defence that his use of the words were directed at Ferdinand by way of forceful rejection and/or inquiry," read the report.

"Instead, we are quite satisfied, and find on the balance of probabilities, that the offending words were said by way of insult."

The report also said Terry's demeanour indicated he had not been accused of making racist comments by Ferdinand as he had claimed.

"We have watched the film footage many times," it read.

"In the critical phase, during which he uses the words, Mr Terry can be seen to be smiling initially, before his facial expression changes to disdainful and contemptuous.

"At no point is his demeanour and facial expression that of someone who is imploring, injured, or even quizzical in the face of an unfounded allegation by Mr Ferdinand that he had just been racially abusive towards him.

"Anger is a conceivable reaction to such an accusation, but at no time does Mr Terry convey any sense of 'no, I didn't' with his facial expression, or body language."

While the report criticised Terry, it added there was a large body of testimonial evidence, including statements from black footballers, to suggest he is not a racist.

The report also said he had only received a four-game ban because the "racist insult was issued only once".

In contrast, in December 2011 for racially abusing Patrice Evra.

Suarez was said to have repeatedly used an abusive word when talking to the Manchester United defender.

Anti-racism group Kick It Out welcomed the commisson's findings and said the case has caued trauma to the Ferdinand family.

"It's a period that has polarised the game, undermined the good work being done at all levels, and it must never be allowed to happen again," it said in a statement.

"The words used are completely unacceptable, irrespective of how many times they were levelled.

"As campaigners we remain committed to the strongest action being taken against discrimination and supporting victims of it."

Meanwhile, to the contents of the report.

One of the chapters, entitled the 'evolution of Ashley Cole's evidence', questioned his witness statement, claiming he added the word "black" at a later date to help Terry's defence.