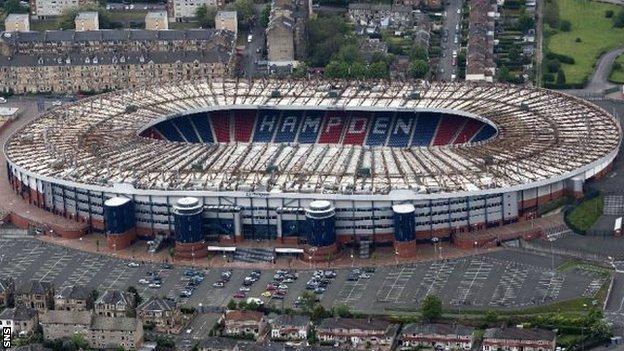 Hampden Park will become a football-free zone for a year as it is transformed into an athletics arena for the Glasgow 2014 Commonwealth Games.

The stadium, used for Queen's Park home games, Scotland home matches and the latter stages of Scotland's major cups, will close from November 2013.

Scotland's national stadium, with a new 400m track, will host all of Glasgow 2014's track and field competitions.

The temporary track will raise the surface of the arena by 1.9m and create a 44,000-seater stadium, returning to a 52,063-seater following the Games.

"Some of the planet's biggest music stars have also played at the stadium enjoying the unique atmosphere and energy created at Hampden.

"The Commonwealth Games will add world-class athletes to the list of greats who have enjoyed the Hampden experience.

"The Games will be something the entire nation can look forward to and be proud of."

Organisers say the stadium "will commence normal activities by late 2014".

It is not yet known if Queen's Park will be allowed to play some of their games in each of the two seasons at their home ground, or if the SFL will insist on them ground-sharing for two complete seasons.

Lesser Hampden, the small ground adjacent to the main stadium, is not an option to host Queen's matches because it is to become a warm-up area for the athletes.

BBC Scotland understands that Partick Thistle have been approached about a ground-sharing deal at Firhill, but that is one of a number of clubs who have been in discussions with the Spiders.

Queen's Park hope to have their fixture future decided by the end of this year.

SFL chief executive David Longmuir said: "We will work with Queen's Park and other member clubs to ensure that suitable arrangements are made for all displaced league fixtures.

"We will also turn our thoughts to possible venues for displaced League Cup semi-finals and the final itself."