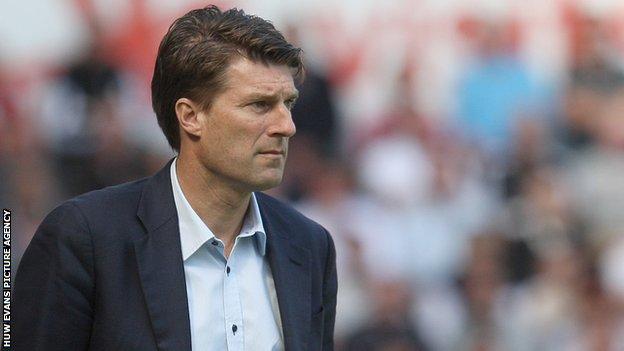 Manager Michael Laudrup says his Swansea City side are not obsessed by their three-match winless run.

Swansea have lost their last three Premier League games after a promising start which saw them unbeaten in three.

Laudrup does not consider Saturday's game at home against winless Reading as a "must win" but acknowledges it is a six-pointer.

"We want to win but we're not obsessed. By obsessed I mean we still need patience," Laudrup said.

It's not how you start - it's how you finish

"Three games, no goals, no points - that's obviously something you always have to take seriously. But you have to keep balance.

"Nobody has doubts, we really want to win this game because it's important for us."

Laudrup refers to the game as a six-pointer as victory for Swansea would see them move eight points clear of the Royals.

But an away win for Reading would see them close the gap on Swansea to two points.

Laudrup is keen to go into the international break on the back of a win after defeats to Aston Villa,Everton and Stoke.

Swansea will resume their Premier League campaign on 20 October against Wigan, who have only won one game this season.

Laudrup acknowledges matches against Reading and Roberto Martinez's Wigan side will be important during the course of the season.

"I don't know if they're must wins but every time you play direct rivals you can call it a six-pointer," said the former Denmark striker.

"Obviously there's a huge difference between getting three and losing three. So that's why they are very important. These are the games we have to get points."

Laudrup says newly-promoted Reading, who have yet to win a league match this season, will also have targeted points at the Liberty Stadium.

But the Swansea manager says it is still too early in the season for sides in the bottom half of the table to panic.

"I can't speak for Reading but I think they're thinking the same way as I do," Laudrup added.

"It's one more game they would really like to get points here that would be important for their confidence [and] for the table as well.

"But I think their manager [Brian McDermott] and players see the season the same way as I do whatever happens on Saturday, there's still 31 games to go.

"You can start very poor and end very good. I think Wigan last year had six points after 12 games that you would say is relegation form.

"West Bromwich lost four of their first five games and ended in the top 10. It's not how you start - it's how you finish."

Laudrup confirmed Kemy Agustien is back in full training but the Dutch midfielder would not feature against Reading.