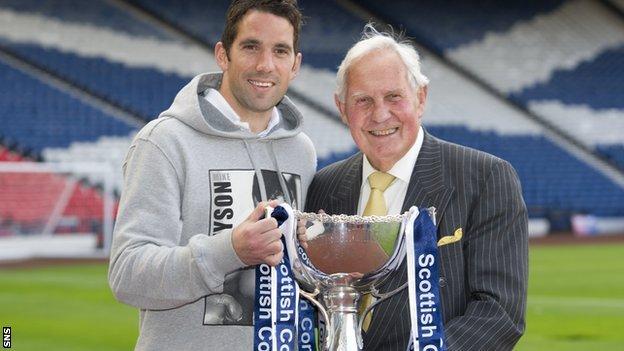 Rangers have been drawn at home to Inverness CT in the quarter-finals of the Scottish Communities League Cup.

The tie should please Rangers manager Ally McCoist who, following his team's win over Motherwell in the previous round, said he hoped for a home tie.

St Mirren have an away tie against Aberdeen and Celtic will host St Johnstone.

The Dundee United-Hearts tie will be shown live on BBC One Scotland on 31 October, kick-off 1915 GMT.

The other matches will take place on 30 and 31 October.

Former goalkeeper Brown, now 91, won the Scottish League Cup with Rangers in the first season the tournament was played, in 1946/47.

Reacting to his team's pairing with St Johnstone, Celtic manager Neil Lennon said: "Tough draw but am grateful we are at home."

The Perth Saints boss Steve Lomas has been named Clydesdale Bank Premier League manager of the month for September.

St Johnstone defender Frazer Wright admitted to BBC Scotland that a tie against Celtic was not ideal but he feels his team can make it through to the semi-finals.

"When you get to the quarter-finals you just need to take what you get and hopefully we can progress," he said.

"The run we are on started with a win against Celtic so there is no reason why we can't do it again."

St Mirren manager Danny Lennon would have preferred a tie in Paisley and acknowledges that Craig Brown's Aberdeen side will present a considerable obstacle to their cup progress.

"It's going to be a difficult challenge for us and a great game," he said.

"This is now the fourth quarter-final in succession in my two years here.

"We are looking to get into the semi-final and we have a group of players who are itching to do that.

"We have to go up there and perform and at this stage of a cup competition there are no easy ties."