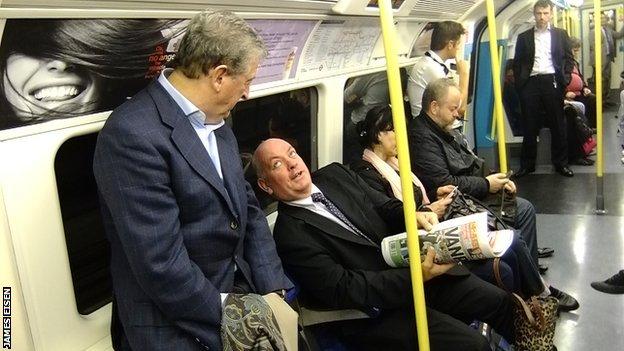 The England coach admitted saying the Manchester United centre-back, 34, would not be in his latest squad, a day before it was announced.

But he denied saying Ferdinand's England career was over.

Hodgson said: "I'm disappointed that a story like that came out and I apologise to him."

His apology has been accepted by Ferdinand's advisors.

The Daily Mirror reported details of Hodgson's exchanges with passengers as he travelled to the Emirates on Wednesday to watch Arsenal's Champions League match against Olympiakos.

"I have to say it is over for him and England. It has got to be the end of the road," Hodgson was quoted as saying.

But, speaking at an England news conference on Thursday, he said: "Of course I didn't say that Rio's career was over.

"What I remember is talking to quite a lot of people on the Tube, and one guy said, 'Is Rio in the next squad?', and I think I might have said 'I don't think so'. But I think that's about as far as I went.

"But I shouldn't say that of course. That's a mistake and I need to apologise for that.

"But this is one of the hazards I suppose of travelling on Tube trains - which is the best way for me to come into London - and then speaking to people who ask me questions rather than sitting there tight-lipped refusing to ever open my mouth.

It's so difficult now, everybody's waiting to catch you out and send pictures off to newspapers to cause problems for people

"I've paid for it. I shall learn in future, and maybe this will be a lesson for all those people who see me on the Tube.

"Please don't be too offended if I refuse to answer any questions you ask me."

Rhys Evans, a passenger who overheard the conversation, told BBC Radio 5 liveDrive that Hodgson did not say that Ferdinand's England career was over.

"He did not categorically say that Rio's career was finished, as has been reported in some of the press today."

Hodgson said he had tried to speak to Ferdinand since the story was published. "I will apologise to him because there's no way I would ever indicate I wasn't going to use a player in that way," he said.

"But the thing is, I didn't choose him in the squad this time, and it's for the same reasons as before. We have other players, but certainly I'm not suggesting it's the end of the line.

"I would never dream of telling a player when its the end of the line or whatever I'm supposed to have said. That's up to the player to decide for himself, and hopefully that won't be the case.

"When I speak to him I'll make it clear I haven't selected him - who knows if I will select him in the next one - but it would be up to him whether he wants to be a part of it or not."

Ferdinand, who has won 81 caps, last played for England in June 2011 and was left out of the Euro 2012 squad for "footballing reasons".

Following Terry's international retirement, ahead of a Football Association disciplinary hearing last week, there was speculation that Ferdinand, 34, could return.

Ferdinand made his England debut in 1997 and has played in two World Cups, representing his country under five different managers.

"Rio has been a fantastic player and still is a top player," Redknapp told BBC Radio 5 liveSport.

"When people talk about Rio losing his pace, he has a little bit. He's not as quick as when he was 18 but he would still be quicker than any of the centre-halves in the squad.

"He is still quick, the only problem he had last week was that Gareth Bale ran at him with the ball, and he can make anybody look slow."