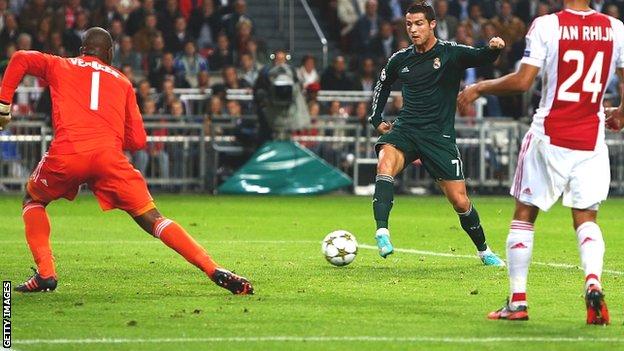 Cristiano Ronaldo's hat-trick inspired Real Madrid to victory over Ajax in the Champions League, as the Spanish giants tightened their grip on Group D.

The Portuguese forward scored once in the first half and twice in three minutes after the interval to seal a resounding 4-1 victory in Amsterdam.

Elsewhere, Paris Saint-Germain slipped to defeat at Porto in Group A, while Malaga thrashed Anderlecht 3-0.

In Group B, German side Schalke were held to a 2-2 draw by Montepellier.

James Rodriguez scored a stunning late winner as Porto dented Paris Saint-Germain's hopes of qualifying for the last 16 with a 1-0 victory in Portugal. The big-spending French club were powerless to prevent the Colombia international from latching on to Fernando's clever cross, from which he curled a first-time shot beyond goalkeeper Salvatore Sirigu and into the net.

Elsewhere, Dinamo Kiev eased to a comfortable 2-0 victory over Dinamo Zagreb in Ukraine to revive their hopes of qualifying from Group A. Kiev were ahead as early as the third minute, when Oleh Gusev drifted in from the left flank to head Ognjen Vukojevic's cross into the net decisively. An own goal from Zagreb defender Josip Pivaric made it 2-0.

Souleymane Camara's late equaliser was enough to earn 10-man Montpellier their first Champions League point after a thrilling encounter with German side Schalke.

The French champions had snatched a first-half lead thanks to Karim Aït-Fana opener only for Julian Draxler to equalise and then win a penalty which saw Montpellier defender Garry Bocaly sent off. Klaas Jan Huntelaar dispatched the resulting spot kick to put Schalke in control only for Camara to strike late on.

Malaga took a huge stride towards the last 16 with a resounding victory over Anderlecht in Belgium. The Spaniards broke the deadlock on the stroke of half-time when Eliseu fired a stunning left-foot volley into the top corner.

Former Valencia winger Joaquin made it 2-0 from the penalty spot before Eliseu scored his second of the night with a delicate chip that left Anderlecht goalkeeper Silvio Proto helpless.

A late own goal by Tomas Hubocan handed AC Milan a vital 3-2 win over Zenit St Petersburg in Russia. The Slovakia defender turned the ball into his own net 13 minutes from time to scupper Zenit's hopes of a dramatic comeback after they had come from two goals down to level the match.

Real Madrid seized control of Group D with a resounding 4-1 victory over Ajax in Amsterdam. Ronaldo's brilliance decided the outcome as the former Manchester United forward scored yet another hat-trick to maintain Real's 100% record.

The Spanish champions raced into a 2-0 lead thanks to goals from Ronaldo and a stunning overhead kick from Karim Benzema, but Niklas Moisander headed into give Ajax hope. That was quickly snuffed out as Ronaldo scored twice in three minutes to decide the tie.

Borussia Dortmund are second in the group after securing a 1-1 draw at Manchester City.