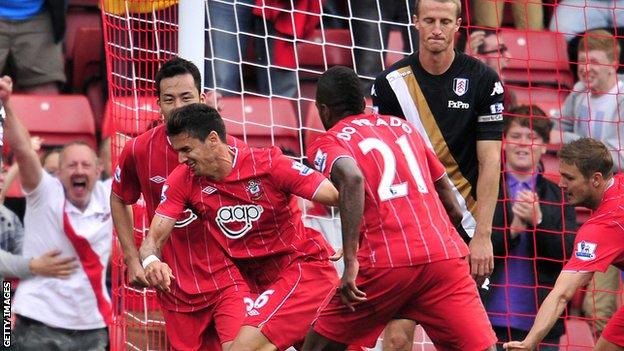 Southampton moved out of the bottom three as Jose Fonte's last-minute goal rescued a point against Fulham.

The Portuguese defender had given the hosts an early lead when he headed in after four minutes.

Jos Hooiveld, on as a substitute for the injured Frazer Richardson, diverted John Arne Riise's shot into his own net to draw Fulham level.

Kieran Richardson looked to have won it with a deflected shot two minutes from time, but Fonte nodded in an equaliser.

Nigel Adkins' side went into the game looking to record a second successive home victory in the Premier League and they made the ideal start, captain Adam Lallana swung a corner into the area and Fonte rose to loop a header beyond the reach of Mark Schwarzer.

Southampton were forced into a change minutes later as Richardson left the field through injury and he was replaced by Hooiveld, who went into the centre of defence with Maya Yoshida moving to right-back.

The reshuffle allowed Fulham to enjoy a spell of possession and they forced a couple of corners, but it was Southampton who went closest to scoring again when Lallana fed a pass to Jay Rodriguez on the left of the area and the former Burnley man crossed low for Rickie Lambert, but the striker shot wide of goal.

Jason Puncheon was next to go close for Southampton as a corner was headed on by Lambert and the winger stabbed a shot towards goal, but Sascha Riether cleared off the line. The two combined again soon after as this time Lambert shot straight at Schwarzer after he was picked out by Puncheon's chipped pass.

Fulham finished the half strongly and had a couple of chances to draw level before the break as first Aaron Hughes directed a header at Southampton keeper Paulo Gazzaniga, before Hooiveld was caught out by a long ball into the area and Hugo Rodallega almost capitalised, but could only poke a shot wide of goal.

Lambert rifled a shot well over the bar after running onto Morgan Schneiderlin's pass as Southampton started the second half strongly, but they had Gazzaniga to thank for keeping the scores level on the hour mark.

Seconds after Steve Sidwell had bundled a shot onto the post, Rodallega's close-range header looked destined for the back of the net but the Saints keeper somehow managed to get a hand to the ball and protect his side's slender advantage.

But there was nothing Gazzaniga could do when Fulham equalised as Riise's shot from outside the area was heading wide before Hooiveld stuck out a boot to divert the ball into his own net.

Southampton have made a habit of dropping points from winning positions this season and it looked as if Fulham had done enough to snatch victory as substitute Kieran Richardson's 88th-minute shot deflected off Hooiveld and past Gazzaniga.

But Fonte prevented Southampton from slipping to a sixth defeat of the season when he headed in from Daniel Fox's delivery in the 90th minute.

Southampton manager Nigel Adkins: "It was a good first half from our boys, we scored a good goal from a set play and we created opportunities, but I was disappointed with how we played in the second half.

"We created some opportunities and could have scored more goals but it is two poor goals we have conceded.

"In the cold light of day we have taken a point and it is obviously pleasing to come back after conceding late on."

Fulham manager Martin Jol: "We didn't play our football in the first half. They pressured us and our first pass was not good enough, we couldn't get the ball to our better players, which is what they did, so all credit to them.

"It is always difficult if you go to places like Southampton and concede a goal after four minutes, that is very disappointing.

"Even the good teams don't usually win more than five or six away games in a season, so if you do that then usually you do well."