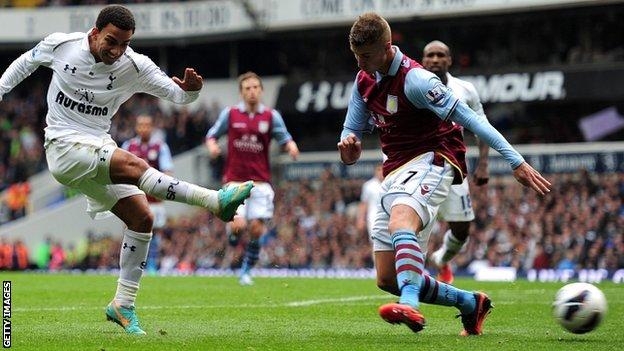 It was fortunate, as Defoe controlled Bale's corner at the back post before his shot deflected in off Caulker.

But Lennon's strike nine minutes later sealed the win with a touch of class.

It was the winger's first goal for nine months, adding to Caulker's first for the club, and Spurs could have made it 3-0 when Bale hit the post late on.

Their task was made much easier when Villa were reduced to 10 men, having used all their substitutes, following a serious-looking injury to left-back Joe Bennett with 13 minutes left.

The former Middlesbrough player was taken off on a stretcher after he and Bale chased the ball to the goal-line and crashed into the advertising hoardings.

Villa are still to win away from home this season, while Andre-Villas Boas' team remain unbeaten at White Hart Lane and move to fifth in the table.

Other than the two goals in a nine-minute period, the game was no classic but it made for a comfortable Premier League debut for Tottenham keeper Hugo Lloris, who ended Brad Friedel's incredible record of 310 consecutive Premier League games.

Lloris was rarely tested, although a poor throw did contribute to Villa's best chance, but questions will remain about Villa boss Paul Lambert's use of striker Darren Bent.

The England forward started the game on the bench, having scored last week against West Brom, and he would have watched in horror as Benteke headed off-target just before Spurs went ahead.

Villa struggled to cope with Tottenham's initial threat down the left, with right-winger Lennon seeing more of the ball as the half wore on, but Villas-Boas's side failed to test Brad Guzan significantly.

At one stage the American keeper darted out of the box to intercept a Spurs through ball, but did well to avoid clipping the advancing Bale, who was lucky not to be booked as he went to ground.

The visitors rode the Spurs swell of pressure and came more into the game as Gabriel Agbonlahor cut in from the left to receive the ball with Lloris quick to close the Villa forward down when he was put through, and the France international keeper also punched Benteke's effort away.

Benteke then twice went close after the break, first shooting straight at Lloris and then heading wide from Marc Albrighton's cross when Spurs' France international keeper had given the ball away.

Those near misses seemed to spark Tottenham, however, and after Defoe had shot narrowly wide following a quick break Spurs took the lead.

From a deep corner from the right, Defoe controlled the ball at the back post and fired towards goal but with the ball heading wide it clipped off Caulker's heel for his first Premier League goal.

Bent was eventually introduced, alongside Charles N'Zogbia, but they barely had time to break sweat before Tottenham went further ahead when Lennon ran straight at Bennett and smashed a shot into the far corner.

Once Villa's full-back went off there was little chance for them to alter the course of the game, and Spurs are now beginning to build real momentum.

Aston Villa manager Paul Lambert: "We were well in the game, and had two brilliant chances through Christian Benteke. He has to score one of the two of them, especially away from home; he has to hit the target from the header.

"I've said that to him you have to score those at this level but he's a young player and he will learn every day."