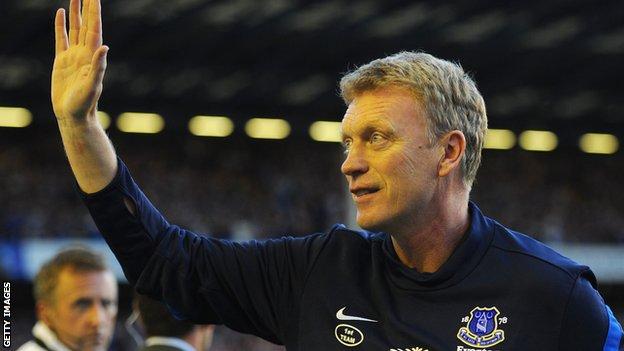 David Moyes says he would have paid to watch Everton's latest victory but has told fans not to get "too dizzy" with the club's lofty position.

The Toffees climbed to second in the table after a 3-1 win over Southampton, their fourth win in six league games.

"If I had paid to watch that then I would have been pleased," said Moyes after two goals by Nikica Jelavic and one by Leon Osman earned victory.

"But we've just got to watch that we don't get too dizzy."

The last time Everton secured 13 points from the first six league games they went on to secure a Champions League qualifying spot after finishing fourth in the 2004-05 campaign.

But Moyes, who is out of contract at the end of the season and has yet to sign a new deal, is refusing to contemplate another possible top-four finish until he has achieved his first goal - securing Everton's Premier League status.

"I don't think Everton managers can say 'Let's avoid relegation', but I think that is always the first route for every club and it still is for Everton," said the 49-year-old Scot.

"The next part is then 'can we make a European spot and if you are very good can you make the dream spots, the big ones?

"I'd like to be in there, in the mix, during the season but I don't think Manchester United and Manchester City will be worried to see Everton there at this time of the year.

"They might be worried if in April time we slip to the top of the league."

Southampton, 17th in the table, have now conceded 18 times in six games since returning to the Premier League, and manager Nigel Adkins says his team must stop leaking goals.

Although Gaston Ramirez headed the Saints ahead at Goodison, three goals in 13 first-half minutes condemned them to a fifth defeat in six league games since winning promotion from the Championship.

"We are learning about ourselves all the time," said Adkins.

"At the moment we're conceding far too many goals. Are we too adventurous? No. We have got to win, this game is all about winning."