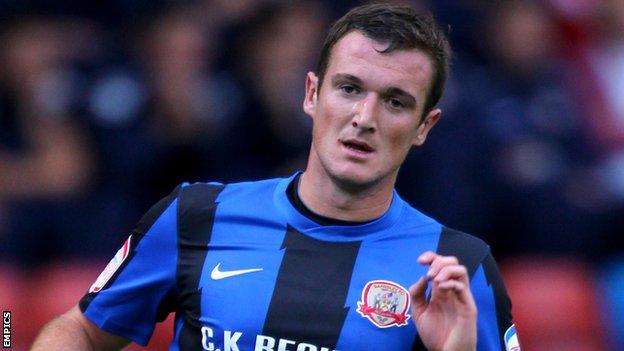 Telford-born former Wolves trainee Collins, 24, has been signed as cover for Joe Jacobson, who faces up to six weeks out with an ankle injury.

Winnall, 21, helps fill the hole left by the departure of James Collins in June, to Saturday's opponents Swindon.

"We were looking to strengthen the squad anyway, but Joe's injury just made it a bit more urgent."

Collins has been signed for the second time by Turner, who first took him on loan to Hereford in 2007 before he joined Port Vale, initially on loan, where he scored four goals in 142 league games.

Sam Winnall is a striker that can bring other people into play but has a natural goalscoring instinct too. Lee Collins is a versatile defender who can play anywhere across the back

After going on loan to Barnsley late last term, he made a more permanent move to Oakwell in the summer, but has so far not played this season.

"Although Lee is still young at 24, he has a lot of league experience," the Town boss added.

"He's a player I know well, having played 16 games for me when Hereford got promotion to the second divison. Then he had a successful few years at Port Vale before Barnsley bought him.

"He's a versatile player and a very good defender. He can play left-back and anywhere across the back and, although he's better defending than going forward, he's solid, dependable and a good pro."

Wolverhampton-born Winnall, whose only first-team appearance for his parent club came in a League Cup tie against Southend two years ago, will be making his fourth loan move from Molineux.

He has had loan spells at Burton Albion, where he hit seven goals in 12 starts, Hereford United and Inverness Caledonian Thistle.

"We came up against him at Burton, where he had a terrific record," said Turner.

"And he impressed me when I saw him play the other week for Wolves' Under-21s.

"He's a striker that can bring other people into play but has a natural goalscoring instinct too."