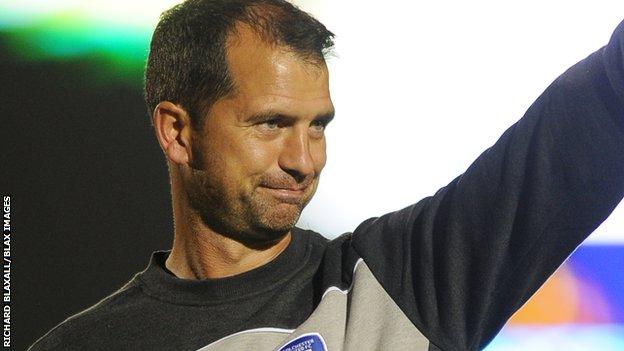 The 39-year-old, who was Ward's assistant, has been on the coaching staff at the club for 10 years.

He has signed a one-year rolling contract and will have former Republic of Ireland midfielder Mark Kinsella as his number two.

"I have no fear about the job and if I'd said 'no' I'd have regretted it for the rest of my life," said Dunne.

A former U's player, who retired at the age of 29, Dunne was initially appointed on a caretaker basis when Ward lost his job, having filled in briefly as acting boss once before.

But he said he had made it very clear he did not want to reprise that role.

"Last time I was just keeping things ticking over. I didn't want to do that this time and made sure I let the chairman know that.

He was also caretaker manager of the U's after the resignation of Paul Lambert in August 2009 and won one of his four matches in charge before Aidy Boothroyd took over.

"This is the result of 10 years of graft. I have worked with many managers and many players and accumulated my style and my way of doing things," the Dubliner said.

The Essex club have made a disappointing start to the campaign, failing to win any of their first nine matches this season, but expect to announce some loan signings later on Friday.

"I believe in an attacking style of football but it is important that players know their responsibilities," said Dunne.

"I've spoken to them and told them what I expect. They need to give everything. To improve, you have to get out of the comfort zone."

Dunne plans to hand much of the responsibility for what happens on the training ground to Kinsella, who began his playing career at Colchester before moving on to Charlton, Aston Villa, West Brom and Walsall, as well as winning 48 caps and appearing at the 2002 World Cup.

He was formerly assistant manager at Charlton but most recently has been part of the coaching team at Blue Square Bet North club Histon.

"I'll be out watching games all the time because we need to do what's right to take the club forward," he added.

"It's an absolute team effort now. Even at the Olympics, the teams supported the individuals. We need that if we are to succeed."