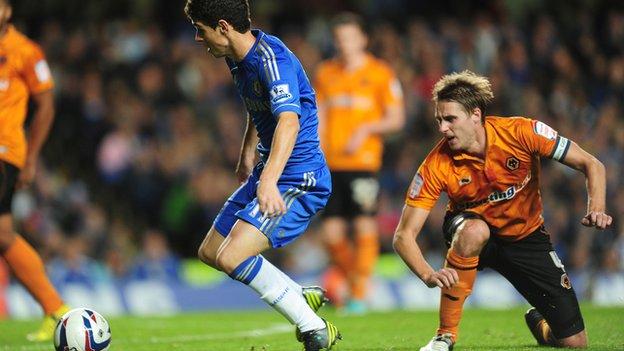 Wolverhampton Wanderers midfielder Dave Edwards insists that Tuesday's 6-0 Capital One Cup caning at Chelsea will not affect their Championship form.

A weakened Wolves side were no match for the Premier League leaders.

But Edwards insists that there will be no hangover when Dave Jones' Sheffield Wednesday visit Molineux on Saturday.

"We've had such a good week in the Championship, we won't take anything out of this game into Saturday," Wolves' stand-in skipper told BBC WM.

"We've got nine points out of nine, with another two home games coming up.

"And a lot of the boys have had a rest. We'll dust ourselves down and put this behind us."

Old gold and black is not the colour at Stamford Bridge . . .

One source of comfort for Wolves, sixth in the Championship, as they analyse their biggest defeat since March 2007 (a 6-0 home defeat by Southampton) was that Edwards considered all the goals were avoidable.

"The cynic in me says that all six we could have dealt better with," he added.

"Most of the goals were of our own doing and we should be a lot better than that.

"You know set pieces is somewhere you can match a team like Chelsea and to give them three from set pieces is very disappointing.

"But we made some silly mistakes and shot ourselves in the foot right from the start.

"As soon as it gets to 3-0 down you're looking at damage limitation.

"Three out of the last four times we've played here we've been three down in no time. And it's hard to come back from that."

While it was a disappointing team effort from Stale Solbakken's side, Edwards did at least have the honour of skippering Wolves for the first time.

"To lead the team out at Stamford Bridge is a great thing," he said.

"I feel a great deal of pride to have worn the armband."