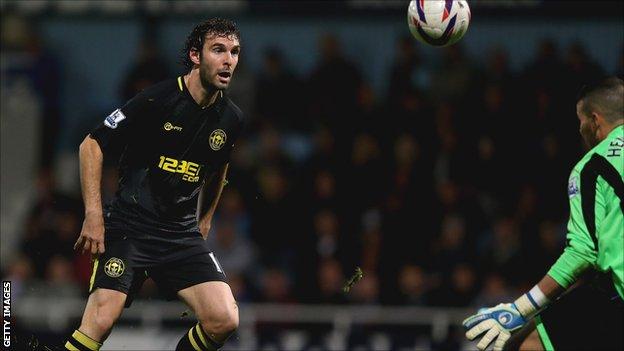 Roberto Martinez expects Argentina striker Mauro Boselli to have a real impact this season after two years in the wilderness with Wigan.

Boselli joined the Latics for a club-record fee in 2010 but struggled to adapt to the Premier League.

He scored twice as Wigan progressed to round four of the Capital One Cup.

"To have a goalscorer enjoying his football is a massive asset," boss Martinez told BBC Radio Manchester after

"I've been delighted with his attitude, his football and his goals."

The 27-year-old made just 12 appearances in his first season with the Latics, but he failed to score a Premier League goal and ended the 2010-11 campaign on loan with Italian Serie A side Genoa.

He then spent all of last season in his home country with Estudiantes, the club he was signed from by Wigan, before returning to the DW Stadium in the summer.

Boselli has only played 30 minutes of Premier League football this season, but has netted for Wigan.

"Mauro came back this pre-season being ready," continued Martinez.

"Early on, it was a bit unfair on him. He could not be himself because he was settling into the new style and the new league and it was very difficult.

"We sent him away, back home to Argentina, and I think that period gave him the time and the maturity that he needed to focus on being an important player for us."