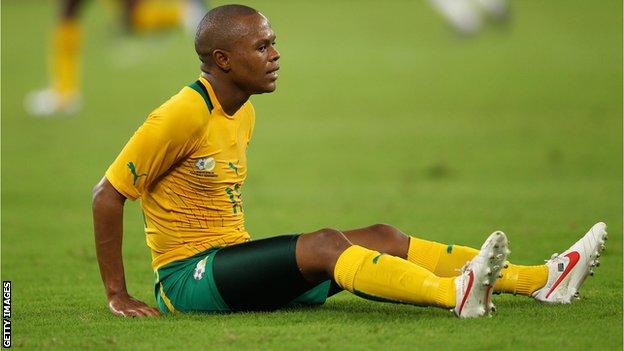 South Africa star Thulani Serero faces a lengthy lay-off through injury but has not ruled out a return in time for the 2013 Africa Cup of Nations.

An MRI scan this week confirmed that the 22-year-old will be sidelined for at least two months after tearing his groin playing for Dutch giants Ajax Amsterdam.

It is a major blow for Serero, who was just starting to find his feet for Frank de Boer's side following an injury-plagued debut season in Europe.

He scored his first goals for the club last month but despite his obvious disappointment, the product of the Ajax Cape Town academy is still hopeful he can play some part in next year's Cup of Nations, on home soil.

"Of course it is frustrating because I was just starting to play regularly and was feeling comfortable in the team," he said.

"We're still going for some more tests so it's not confirmed how long I will be out for at the moment.

"The doctors will tell me what they think and I will just have to do my best to get back as soon as possible."

Serero played in South Africa's 1-0 defeat to Brazil earlier this month and had been earmarked for a key role under new coach Gordon Igesund, who took over from Pitso Mosimane in June.

Having forced his way into the reckoning at Ajax after missing the majority of last season through injury, he remains optimistic that he can make an earlier return than anticipated. At the moment, though, the Cup of Nations is not his priority.

"I can't afford to think about that now," Serero told BBC Sport.

"All I can do is focus on Ajax and my own recovery. For now, that is more important. Later in the year then I can start to think about whether I will make the Afcon."

He added: "It all depends on how the recovery goes. I don't know at the moment.

"It could be earlier than that or it could be later. We will just have to see."