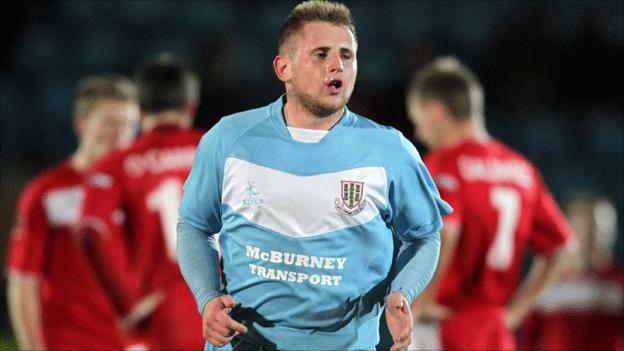 County Antrim Shield holders Cliftonville crashed out of this year's competition with this quarter-final defeat by Ballymena at the Showgrounds.

David Cushley went close several times before scoring the winner with a shot into the roof of the net on 32 minutes.

George McMullan's header went just wide of the post in the 39th minute.

After the break Johnny Taylor cleared off the line, James McCabe was unable to convert two good chances and Stephen Garrett shot straight at Dwayne Nelson.

Ballymena came into the game with manager Glenn Ferguson demanding more from his players following their heavy 4-1 defeat by Coleraine in the Premiership on Saturday.

The Sky Blues responded well and livewire winger Cushley flashed a couple of efforts wide of the post early on and also headed over.

The former Lisburn Distillery player rifled the ball home however when the ball fell to him on the edge of the box after James McCabe's shot had been blocked.

McCabe could not find the net with a header in the 48th minute despite being left unmarked at the back post.

With 10 minutes remaining, the 19-year-old tried to round goalkeeper Ryan Brown, but was unable to do so.

Garrett wasted a fine opportunity in the 73rd minute when his backheel flick was easily gathered by Nelson.

The Reds pressed for an equaliser late on but were unable to make their pressure count.