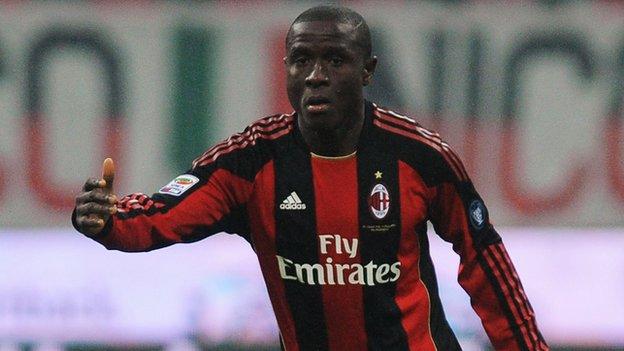 Sierra Leone have selected AC Milan's Rodney Strasser for their 2013 Africa Cup of Nations qualifier against Tunisia, despite the midfielder being injured.

The 22-year old is nursing an ankle injury he sustained in July in training with Serie A club and has yet to play this season.

But he has been named in the Leone Stars' 20-man squad for the trip to Tunisia for the second leg of the final-round qualifier, which is to played between 12-14 October.

The tie is finely poised at 2-2 after the first leg and Leone Stars' Swedish coach Lars Olof Mattsson appears desperate to examine all his possible options.

"I tried to reach Strasser several times on the phone to know about his rehabilitation but to no avail and I just decided to include his name in my list," Mattsson told BBC Sport.

Strasser revealed he only heard of his selection from the BBC - and is uncertain whether he would be in any condition to play.

"I'm surprised to learn from the BBC that I've been invited for the Tunisia game," he said. "I'm yet to receive an invitation from the Sierra Leone Football Association (SLFA).

"My club told me that coach Mattsson has been trying to reach me but I don't know if I'll be declared fit to play for Leone Stars by AC Milan doctors because I'm still under rehabilitation.

"I've just started running as part of my rehab programme."

With the situation less than clear, Mattsson has understandably thought of an alternative.

"In my email to both the Sierra Leone FA and Sports Ministry, I stated that I'll invite the Moldova-based Abu Tommy if Strasser is not fit." he said.

However, FC Tiraspol's Tommy is another 22-year-old who has not played a match this season as he continues to recover from injury.

Meanwhile three of the squad, which includes 18 overseas players, have yet to win their first senior international cap. They are Portsmouth's Mustapha Dumbuya, Finland based goal keeper Unisa Bangura and home-based defender Ishmail Koroma.