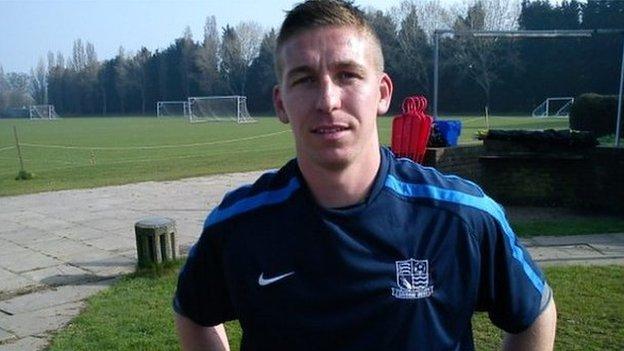 Southend striker Freddy Eastwood has admitted he faces a fight to secure a starting spot after scoring his first goal of the season for the club.

The 28-year-old came off the bench to net the winning goal in Saturday's 2-1 win over Exeter.

He is now free of a niggling calf injury and told BBC Essex: "Whoever gets the shirt has got to try and hang onto it at the minute.

"There's plenty of players on the bench who want to come on and take it."

He scored 65 goals in 135 games in his first spell at Roots Hall and another two from nine appearances during a loan spell last season.

It was expected that he would be a key figure for boss Paul Sturrock as the club looks to surpass last season's efforts when they lost out in the promotion play-offs.

However, the injury kept him out of the side until he was named as an unused substitute against Gillingham last week.

"I felt I was very close to being tip-top fit for the start of the season and then just pulled my calf," he said.

"It was disappointing but the boys have been doing well, so hopefully now I'm back, and one or two other boys are back, we can go on a good run."

Corr also made a goalscoring return against Exeter, having sat out the whole of last season because of a knee problem.

"For the last few weeks I've obviously been training with him," Eastwood added.

"I've only been short-term, but I'm sure for Barry, the time he's been out and watching the boys playing, must have been devastating for him, but I'm pleased he's back."