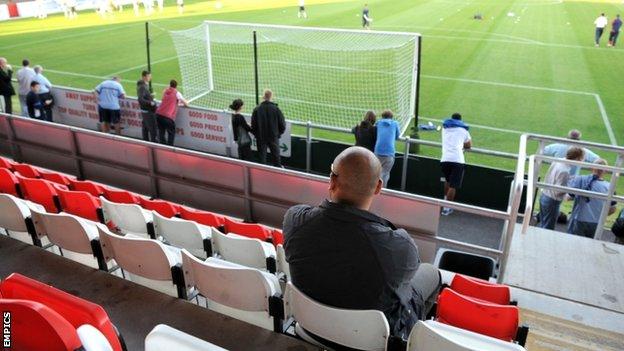 At the top of the English game, footballers are entitled to luxury travel, plush overnight accommodation and the best pre-match meals available to ensure their best possible performance.

It is a safe bet that no players in the Premier League will be facing a two-hour train journey on the morning of the match followed by a brisk walk to the ground. But life at the bottom of the Football League pyramid moves at a very different pace.

"We look at travel costs all the time," Thompson told BBC Sport.

"We are playing York on Saturday. The King's Cross to York train is two hours, and the ground is about three-quarters of a mile from the station.

"We'll send the kit up in a van on the Friday night - the physio will drive that up - and the team will go up by train on Saturday morning.

"We're not laying on a coach at the other end. The manager says the players can walk as it will do them good to stretch their legs.

"We are booked on the half past six train home, and all in all we are saving about £1,300 by not staying over. Job done."

Life in League Two for the Daggers is a constant battle to balance the books.

Last season John Still's men were watched by an average attendance of 2,090 at their Victoria Road home in east London, and this season that figure has fallen to 1,755 after six home league games.

They consider their tickets to be priced "competitively", and, with matchday ticket prices ranging between £17 and £22, they are well placed in our

The Daggers made around £400,000 from season ticket sales and gate receipts last season - a sum top players in the Premier League earn in a fortnight but which makes up around a third of Daggers' total income from football.

One option to increase the gate would be to slash prices but, with some fixtures at Victoria Road housing as many away fans as home fans, the club have to maximise that income from visiting supporters.

Football League rules dictate that away supporters must be charged the same as home fans, so reducing prices is not an option.

So how do they compete against sides such as Bradford, Rotherham and Oxford, who attract thousands more supporters per game?

The answer, according to Thompson, lies in hard work and adaptability. He may be MD but he also cashes the wages for everyone at the club, does all the invoices and even helps getting the match-day programme to print.

Brighton striker Craig Mackail-Smith scored 38 goals for Dagenham & Redbridge before moving to Peterborough for a six-figure fee in 2007 - but he nearly blew his chance.

Daggers managing director Steve Thompson remembers: "Craig was on £125 a week with us when he started; he's on a bit more than that at Brighton now. When he came in to sign for us he wanted three complimentary tickets per game for his mum, his dad and his granddad. We only give two. I said 'Is he any good?'. John Still said 'Not really but we'll take a chance on him'. I said 'Right, he can have three at first but if he's no good he's back to two like everyone else'."

"The challenges are enormous," he said. "One of the ways we manage is by having a very small number of staff. We constantly look at where we can save money and all our people do more than one job.

"Running the club, there's me, a secretary, a commercial manager and then two lads who are on work placements from Bournemouth university.

"One of them is the ticket office and club shop and the other guy runs our website and writes the programme.

"That's it. We run the whole place on three full-time staff and two students."

Despite the club surviving on a shoestring budget, with a core group of players earning a basic £200-300 a week, Thompson consistently breaks even over a three-year period.

He has been helped enormously by Still's consistent knack of finding young talent from non-league clubs and selling them on.

In recent years Craig Mackail-Smith, Paul Benson and Solomon Taiwo have been signed from clubs such as Arlesey Town and White Ensign FC and the trio were later sold for a combined fee of more than £750,000.

Thompson admits Dagenham may have to sell another player this season to stay out of the red.

"This year we are forecasting a loss again; we are set to be down," he said.

"So we need a cup run this year or we'll have to sell a player. There are a couple who we might be able to sell but we're still hoping for that third-round FA Cup tie away at Manchester United."