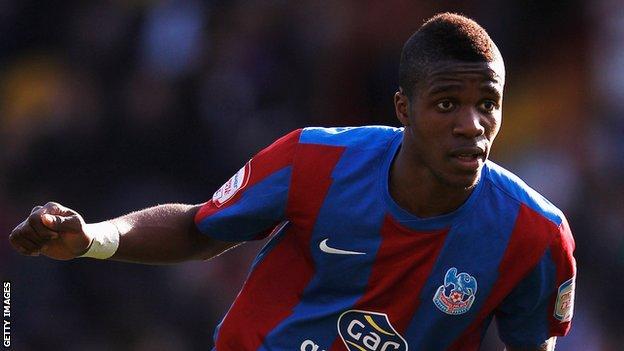 Sylvan Ebanks-Blake gave the home side the lead early in the second half, pouncing on Damien Delaney's mistake before scoring.

But Zaha scored his first of the season in the 67th minute after a mazy run.

The England Under-21 winger then sealed Palace's fifth win in six matches with an unstoppable strike on the turn.

Palace condemned Wolves to their first home defeat of the season despite the absence of influential midfielder Kagisho Dikgacoi.

And Wolves were dealt an added blow as Polish wide man Slawomir Peszko stretched knee ligaments and is likely to be out for four to six weeks.

Palace keeper Julian Speroni made a superb save to keep out an Ebanks-Blake header in the 31st minute, then parried behind Bakary Sako's cross-shot from the left.

Joel Ward came to Palace's rescue in the 39th minute when his superb sliding tackle denied Kevin Doyle a clear shot at goal.

There was controversy shortly before half-time when Palace were denied what appeared to be a blatant penalty as Sako made a clumsy challenge on Zaha.

And the decision looked as if it would prove crucial eight minutes after the restart when Delaney dawdled on the edge of the area, and Ebanks-Blake drilled a low shot past Speroni.

Doyle almost made it 2-0 soon after when his shot crashed back off the crossbar after Sako's initial effort had been saved.

Yet Palace drew level courtesy of Zaha's mazy run in the area and angled finish.

And the wide man - linked with a couple of leading Premier League clubs over the summer - completed the Eagles's comeback just six minutes later when he turned Stephen Ward on the edge of the area and fired home.

"It's a little bit different at this club because, under my leadership, I've known that kid since 14 years of age. It's a relationship which goes a little bit further than contracts.

"When he's ready and when I think he's ready to let him go to the right club, I will tap Wilfried on the shoulder and tell him I can't help him any longer.

"It's a little bit different with my kids, the relationship has been there a long time."

"We were the better team and had the most chances in the game. We should have scored more than one goal.

"We hit the bar when it was 1-0. We should have had at least one and maybe three points from the game. That's football.

"We struggled a little bit taking care of the guy who scored the two goals. He took them fine. He's good one against one. I thought that the first was offside, but that can happen. The linesman can make a mistake."