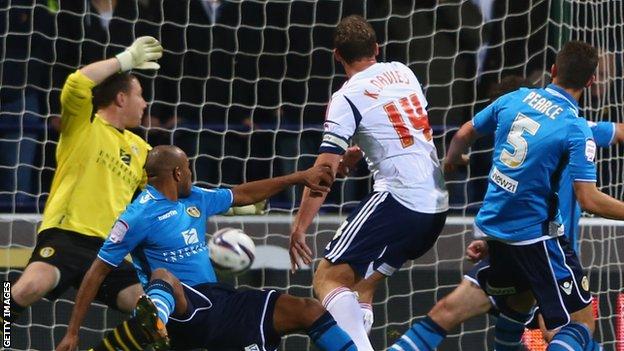 The hosts were rewarded for their early dominance when Davies powerfully headed in a corner from Chris Eagles, who struck a post soon afterwards.

Leeds levelled through Sam Byram's glancing header and Luciano Becchio converted a penalty to put them ahead.

Another Davies header from a Martin Petrov corner rescued a point, while El-Hadji Diouf hit the bar for Leeds in stoppage time.

Davies, 35, has played 379 games for Bolton, scoring 82 goals. He has four to his name this season, having also netted in home victories against Derby County and Watford.

Bolton old-boy Diouf, named captain for the night on his return to the Reebok Stadium, had looked the most threatening player for the visitors and was inches away from coming back to haunt his old club.

Having conceded a spot-kick for the fourth Championship game in succession, Bolton were frustrated for long spells during the second half and it looked as though Owen Coyle's side would be heading for a second home defeat in the space of four days.

Leeds, who missed out on a third consecutive league win, were thankful to goalkeeper Paddy Kenny, who denied Eagles and Keith Andrews in the first period, as well as Mark Davies and Matt Mills as the home side pressed for an equaliser.

Much of Bolton's attacking intent came through Davies, who linked up well with Eagles during the early stages of the game.

The pair combined to open the scoring with 14 minutes gone, Eagles delivering a corner into the box and Davies working room for himself to head beyond Kenny.

Winger Eagles almost doubled the lead in spectacular fashion moments later, but his 25-yard drive smacked off the face of the post and away to safety.

Bolton missed a number of other first-half opportunities, the clearest of them falling to on-loan Arsenal front man Benik Afobe, who prodded wide with just Kenny to beat.

And the visitors made Wanderers pay for their profligacy a minute before the break.

Diouf, who spent four years at Bolton, floated in a delightful left-wing free-kick which may have found the net anyway, but the impressive Byram made sure with the deftest of headers that nestled into the far corner.

Byram was in the thick of the action again five minutes after the interval, racing onto a through ball and falling under the challenge of Bolton's on-loan defender Stephen Warnock inside the box to earn his side a penalty.

Becchio stepped up and coolly sent Bolton keeper Adam Bogdan the wrong way from the spot to net his eighth goal of the campaign and put Leeds 2-1 up.

Coyle threw on Marvin Sordell and Petrov from the bench in an attempt to get back into the game and it was the Bulgarian winger who created the equaliser for Davies, the ex-England striker again wrestling free from his marker to head in from close range.

Bolton manager Owen Coyle: "Our performance level, particularly in the first half, was outstanding in terms of passing, moving the ball and creating chances.

"We showed a lot of spirit and grit to get back into the game. The skipper [Kevin Davies] epitomised everything we want at the football club, and in truth we should have gone on to win the game.

"There's a lot to be pleased about in respect of the performance level, but we're disappointed to have passed up two points. Those results will come."

Leeds manager Neil Warnock: "It's not very often you come to a place like Bolton and be disappointed in the dressing room that you've got a point. It shows how far we've come in a few weeks. I think we're improving every week.

"It's probably my fault that we did not win because I told Rodolph Austin to mark Kevin Davies. He doesn't know much about him and he got caught at two set-pieces so I probably have to hold my hand up.

"When you look at the games we've played over the last 12 days or whatever it is, we've had five games in such a short space of time and every one has been a humdinger, so I can't fault the players. They've given me everything."