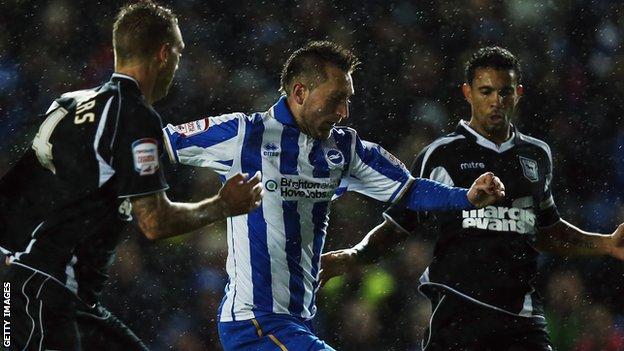 Will Buckley scored late on to rescue a point for Brighton at home to Ipswich.

Brighton should have taken the lead inside the first minute but Kezanga LuaLua fired wide from a promising position.

The hosts were punished for that miss when Ipswich took the lead in the 27th minute, Daryl Murphy heading home.

But Buckley prevented Brighton losing at home for the second successive game when he scrambled the ball over the line in the 80th minute.

Brighton started the evening top of the Championship, but only on goal difference having missed out on a chance to consolidate their position with defeat against Birmingham on Saturday.

They started brightly as LuaLua spurned a fine chance to put them ahead after 30 seconds, shooting wide when well placed.

Scott Loach did well at the other end of the pitch nine minutes later as the Ipswich keeper tipped over Andrea Orlandi's free kick.

Ipswich have won just once all season but it was they who went ahead midway through the first half.

The visitors were unfortunate not to extend their lead soon after the restart when Murphy's close-range shot from Michael Chopra's pass was kept out by the legs of Kuszczak.

That chance seemed to serve as a wake up call for Brighton, who dominated the rest of the half, and they ensured they took a point when Buckley scored from Inigo Calderon's cross-shot.

Brighton boss Gus Poyet: "I'm starting to think everybody is rating us higher than we are.

"They rate us as a top team in this division and come here with a plan, to nick a goal and defend.

"That makes us put in all the effort. It becomes all about us and you need quality for that. But we need to get used to that because it is going to be the plan for every team that comes to the Amex.

"I can't ask for more. We took risks, we played with one defender and went for the win. It worked for Birmingham and it nearly worked for Ipswich, so credit to them."

Ipswich manager Paul Jewell: "We're disappointed not to have got the three points after leading for so long but they are a good team and very difficult to stop. We frustrated them and kept our shape very well.

"We should have gone two up in the second half and been out of sight right after half-time, but if you don't kill sides like Brighton off when you get the chance, they will come back and hurt you.

"We've conceded a lot from set plays this season and we have taken a lot of flak, but the lads have shown that the spirit is still there. We have the togetherness in the squad to turn the bad run around."