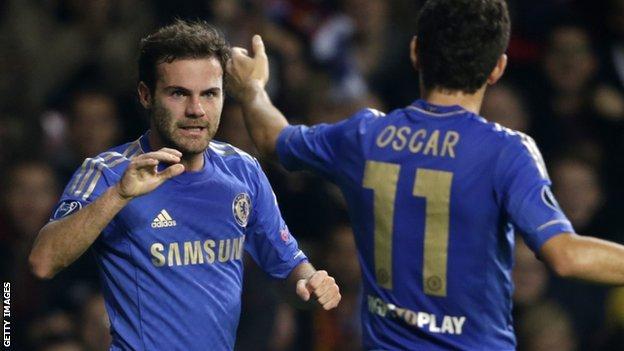 The champions went ahead when Fernando Torres and Frank Lampard combined to set up Juan Mata to slot home.

Danish side Nordsjaelland rattled the Blues, with Joshua John sending a shot just wide and striking a post.

But David Luiz scored with a free-kick, Mata added his second with a left-foot shot and Ramires tapped in to give the scoreline a flattering look.

Chelsea had shown commendable resilience but had also had lived dangerously, with their failure to add to their early lead encouraging their largely unknown and unfancied opponents, who were playing first ever game on home soil in the Champions League.

Nordsjaelland went close to an equaliser on several occasions as the visitors almost buckled, but Luiz's free-kick after 79 minutes proved key to restoring Chelsea's hold on the game and sparked three late goals in 10 minutes.

Chelsea moved top of Group E with the win, while Nordsjaelland might feel aggrieved with the size of their defeat considering the qualify of their performance after a shaky start.

The home side gave the ball away to Chelsea from an early throw-in, allowing Victor Moses, making his Champions League debut for the London club, to backheel a pass to Oscar, whose shot across goal went narrowly wide.

Almost immediately, Oscar crossed for Moses at the far post, but, just as the winger appeared set to head home, Nordsjaelland centre-back Jores Okore flung himself across to force the effort against the post.

Okore had to have treatment after the clash, but, sporting a bandage around his head, was an inspirational presence for his side with his all-action style.

Nordsjaelland gradually shook off the nerves and began to play a style of passing football that meant the visitors had to be wary.

Chelsea left-back Ashley Cole gave the ball away to Dutch striker John, who has eight goals in seven league appearances so far this season, but he sent an ambitious long-range shot well off target.

The home side's weakness was an uncertain defence and, after Torres had a shot saved having picked up Ivan Runje's miscued headed clearance, Chelsea deservedly took the lead through Mata.

Torres caught Enoch Adu in possession and laid the ball across to Lampard, whose deft first-time pass between two defenders was met with a confident finish by Mata past keeper Jesper Hansen.

An alert Hansen then denied Torres but Chelsea failed to extend their lead and were almost punished.

John arrowed a shot just the wrong side of the post before Mikkel Beckmann latched on to Okore's lofted pass, only to send a 10-yard header high.

A 20-yard strike from Nicolai Stokholm stung the palms of Petr Cech, who also pushed another John effort against the post.

However, a dipping free-kick from Luiz went in off the post and signalled a late flurry of Chelsea goals.

Some clever passing from the visitors ended with Mata sidefooting in before Oscar crossed for Ramires to tap in after 89 minutes.

Chelsea are now top of Group E with four points and face second-placed Shakhtar Donetsk in Ukraine on 23 October.