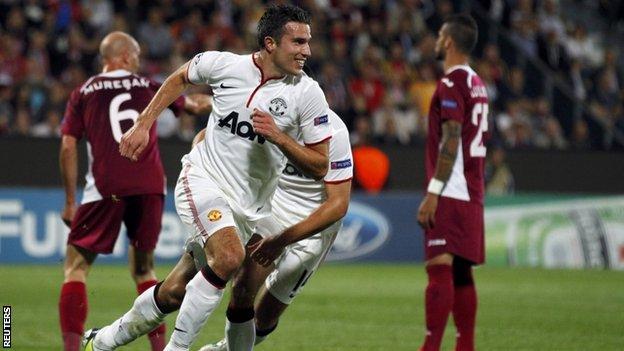 Robin van Persie scored twice as Manchester United came from behind to take a significant step towards the last 16 of the Champions League.

The Dutchman scored either side of half-time to help United recover their poise having fallen behind to Pantelis Kapetanos's 14th-minute opener.

Van Persie's equaliser had more than an element of luck about it, the ball looping into the net off his shoulder.

His winner was delightful, however, as he flicked in Wayne Rooney's pass.

While Sir Alex Ferguson had the luxury of starting with Van Persie and Rooney together, this victory over the Romanian champions was far from vintage.

But United did not have to operate at full capacity as Cluj, having showed glimpses of promise before half-time, faded badly in the second half before Van Persie's sixth and seventh goals for the club took the visitors top of Group H.

The Premier League side had looked the more vulnerable in the opening stages, with Rio Ferdinand and Jonny Evans continuing to struggle in defence, but they worked hard to find their rhythm and eventually saw out the tie with a measure of control that had looked unlikely in the opening 20 minutes.

Two matches against Braga of Portugal should now see United avoid a repeat of last year's failure to qualify from the group.

The 3-2 defeat by Spurs at Old Trafford on Saturday had been the fifth time in six Premier League games United had fallen behind. Ferguson insisted United would not suffer a similar fate in Europe, Cbut luj were ahead after 14 minutes.

They took full advantage of United's growing susceptibility to the swift counter attack with Modou Sougo surging beyond Patrice Evra and crossing low for Kapetanos to evade Jonny Evans and steer his first-time shot beyond David De Gea.

Sougo continued to torment Evra down the right and the hamstring injury that forced the Senegal winger to limp off nine minutes after the goal robbed the Romanian side off their most potent attacking threat.

United's alarming lack of width was undermining their obvious attacking intent. For much of the first half, they looked a team lacking cohesion, confidence and sustained threat; insipid not inventive. After their poor recent form, Ferguson had demanded tempo, instead United were producing tedium.

Opportunities did fall to Rooney, Van Persie and Anderson as United warmed to the task but the manner of the equaliser had more than an element of good fortune.

Van Persie applied the finishing touch but although the Dutchman rose to head Rooney's curling free-kick from wide on the left, it was his shoulder that applied the decisive touch as the ball looped high over Cluj goalkeeper Mario Felgueiras and into the net.

"Manchester United weren't brilliant but they have got through and won the game. With six points, they are in a strong position now. When Sougou was on, United looked frail at the back. Once he went off, they recovered. United were good but not completely convincing up front. Good result, but could do better."

The scrappy nature of the goal was typical of the game. On both sides, the football was muscular and committed but absolutely devoid of finesse. With Cluj going long and United apparently going nowhere, it seemed individualism would be their most likely source of joy.

Van Persie dashed onto Rooney's floated pass and reached the ball a moment ahead of Felgueiras before knocking it beyond the goalkeeper with an impudent flick of his left boot.

United found their swagger to produce some typically eloquent attacking moves but although Cluj faded, Cadu's powerful header forced De Gea to tip over, while the Spanish goalkeeper then had to be at his best to deny Bastos, turning the Brazilian's diving header around the post.

United were unfortunate not to win a penalty when Evra was bundled over in the penalty area late on but in the end it made no difference.