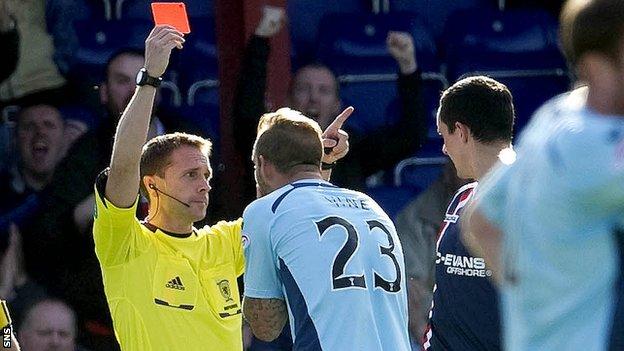 The Saints striker was sent off following an incident involving Staggies skipper Richard Brittain during his side's 2-1 win on Saturday.

"I said it was a very poor decision and I stand by that," explained Lomas.

"But we won't be appealing. The appeals process makes it a waste of time, we have had experience of that before."

With it being Vine's second dismissal of the season, the former QPR forward will miss the visit of Queen's Park in the Scottish Communities League Cup third round on Tuesday and league games against Dundee and St Mirren.

Television cameras failed to shed any meaningful light on the altercation in Dingwall, with the players clashing shortly after Saints had taken a 1-0 lead in the first half.

"Rowan turned his back and was pushed and he turned and stuck his chest out and Richard Brittain went down like a sack of spuds," was the version of events given by Lomas.

"It was a very disappointing reaction. That's him missing for three games."