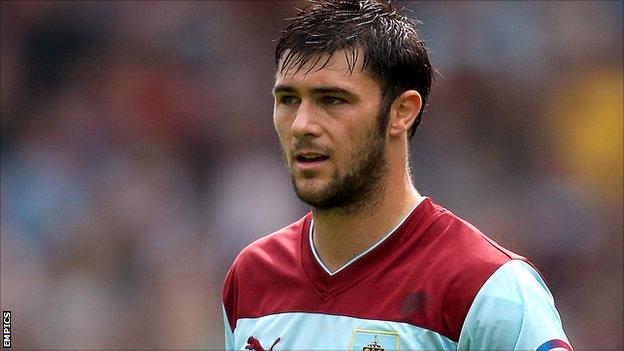 Eddie Howe has admitted he almost substituted Charlie Austin before the striker netted the winning goal for Burnley at Derby on Saturday.

Austin netted in the 89th minute to give his side a 2-1 win at Pride Park.

Clarets manager Howe told BBC Radio Lancashire: "We were holding out for the draw and considering taking Charlie off. Then he pops up and scores."

Austin is the joint-top goalscorer in the Championship with seven, the same number as Barnsley's Craig Davies.

And his brace against Derby means he has netted nine times in all competitions this season.

"It's a great goal return already for him," added Howe. "He just looks so confident when the ball falls at his feet in front of goal.

"The first goal was a fantastic strike, and when there's a cross going into the box, you always hope he's on the end of it. That's what he does. Hopefully he can carry on doing it."

Austin has a remarkable scoring record since making the move into the Football League in October 2009.

He has scored 63 goals in 123 games for Swindon and Burnley since joining the Robins from non-league Poole Town.

And, provided he is selected, the 23-year-old will come up against his former club in the third round of the Capital One Cup at the County Ground on Tuesday.