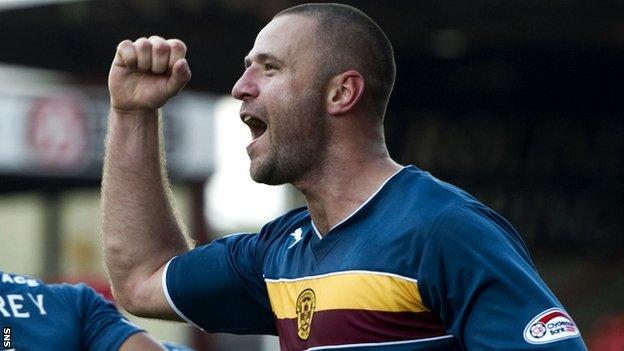 Stuart McCall thinks Motherwell can take confidence into games against both sides of the Old Firm despite losing a two-goal lead to Aberdeen.

"Naturally, it is hugely disappointing to lose the two goals in the manner we've done," the Well manager said after the 3-3 draw at Pittodrie.

"But I'm delighted at the performance. We take confidence from here and have the Old Firm back-to-back now.

"We go to Ibrox and we have Celtic at Fir Park next Saturday."

And MCall thinks his side, unbeaten in domestic football this season, will be in confident mood.

"As much as they are disappointed in the dressing-room, as a footballer you look forward to these games," McCall told BBC Scotland.

"Going to Ibrox, it will almost be a full house, there'll be a siege mentality and that has the makings of a cracker as well."

Well had hit back after Aberdeen, who had drawn their previous three home games 0-0, took an early lead through Gavin Rae.

However, Niall McGinn and a stoppage-time equaliser from Josh Magennis prevented Motherwell taking a three-point lead at the top of the table.

"I know Aberdeen have scored three, but they've not conceded at home and are strong defensively and we've opened them up on numerous occasions and probably should have scored more," said McCall.

"It is bitter sweet. There's a naturally disappointed dressing-room in there, but I take a heck of a lot of positives from the all-round play we've produced.

"We controlled large parts of the game.

"But Aberdeen have a strong squad and, if you had asked before the game, I'd have taken a point.

"Sometimes in football you don't always get what you deserve and you have to give Aberdeen credit for keeping going to get an equaliser."

Motherwell's players thought they should have had a penalty for a tug on Nicky Law prior to the two-goal fightback.

"I am too far back, but all the lads are saying it was a blatant pull back on Laws," added McCall.

"It was a terrific bit of football that carved them open and I think everyone in our team claimed for it."