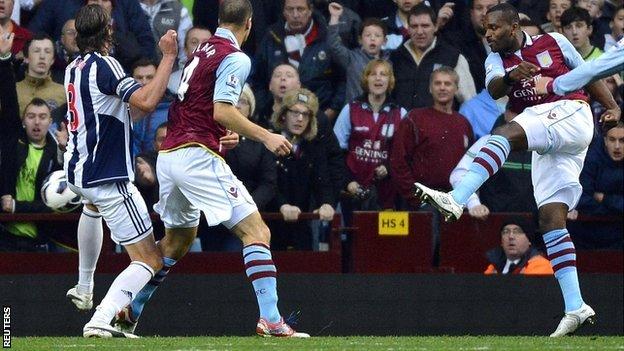 Darren Bent came off the bench to rescue a late point for Aston Villa against local rivals West Brom.

The England striker swept home following a corner on 80 minutes and almost stole a winner when he fired over soon after.

Earlier, Shane Long missed a header but then turned in James Morrison's cross to put West Brom ahead.

Although the game had few chances, West Brom's Romelu Lukaku twice went close as the match opened up later on.

First, the substitute's late shot clipped the post after it was deflected and then following Bent's goal, the Belgian striker was denied by Brad Guzan.

Bent's 150th league goal was the perfect response to being left out of the starting line-up and his replacement Christian Benteke did little to inspire confidence in a Villa side who showed plenty of creativity in the first half but lacked the incisiveness to match.

Paul Lambert's mixed beginning to his Villa reign looked to be improving after the midweek defeat of Manchester City in the Capital One Cup.

And although there was plenty to encourage the Villa fans in this game, they still look some way short of where they would like to be having won just once in the league after six games.

Their most promising openings in a busy first half came from midfielder Brett Holman, who twice tested West Brom keeper Ben Foster - and it is clear that Gabriel Agbonlahor and Benteke need more games to flourish properly.

West Brom remain at the top end of the table based on three home wins and this, a second point away from home, but they had a great early chance to take control of the game when Long headed wide from five yards.

That opportunity, coming from a nod back from Chris Brunt's cross on five minutes, was during a decent early spell where Clarke's side exploited Villa's lack of width.

But Lambert's decision to pack his midfield looked a smart one as they began to take control of the game, and the energetic Holman struck a sweetly hit shot that Foster tipped over, with the Australian bursting down the inside left channel to again be denied by the West Brom keeper.

Benteke also had a decent chance after robbing Billy Jones on the sideline but, when he advanced towards goal, he shot way over. Jones suffered an innocuous knee injury before half-time and was replaced while Chris Brunt also pulled a hamstring.

That had little effect on the visitors though, as they went ahead just after the break. The clever-running Morrison was put in down the right and, although Ron Vlaar slid to clear his centre, Long was lurking behind him to tuck in.

Villa responded, and although they introduced Bent, Charles N'Zogbia and Barry Bannan, they could not reach the same standards of the first half.

Then, as the game reached its conclusion, Bent once again proved his undoubted value by pinching an equaliser 12 minutes after coming off the bench.

From a corner, Ciaran Clark's effort was blocked but when it fell to the striker eight yards out, he lashed a left-footed shot in.

Bent and then Lukaku could both have changed the outcome before the full-time whistle, but former St Mirren team-mates Clarke and Lambert would both have been content with a point.

West Brom boss Steve Clarke: "Having been 1-0 in front and with decent control of the game for long parts we are a bit disappointed not to win but then again, if you said before that we would come away from a difficult away game with a point then we would have taken that.

"The start has been pleasing but we are not getting carried away. Maybe that is a measure of how far we have come that we are coming away from Villa Park with a point and feeling disappointed."