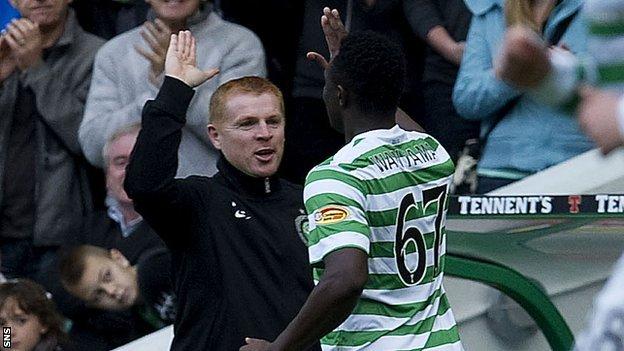 "We were comfortable, we played at a good tempo and thoroughly deserved to win. That's two really good shifts the team have put in and two clean sheets."

Captain Scott Brown had a penalty saved by Dundee goalkeeper Rab Douglas but Brown soon set up Gary Hooper for the opening goal.

Victory Wanyama netted the hosts' second after the break.

"I'm delighted," said Lennon. "Two very good goals and a lot of good attacking play. I would've liked it to have been a bit more of a scoreline to maybe get the substitutes on a bit earlier.

"A lot of our build-up play was good, it was just that final little bit that was missing. Gary hit the post with a great touch and shot but I can't be critical of the team after their efforts on Wednesday as well.

"We've got another big week coming up so I'll just assess the squad tomorrow and see how we go for Tuesday [against Raith Rovers in the Scottish Communities League Cup]."

Meanwhile, Beram Kayal and Joe Ledley will return to training this week and Lennon says another of his players, forward Georgios Samaras, is "not far away" from a return.