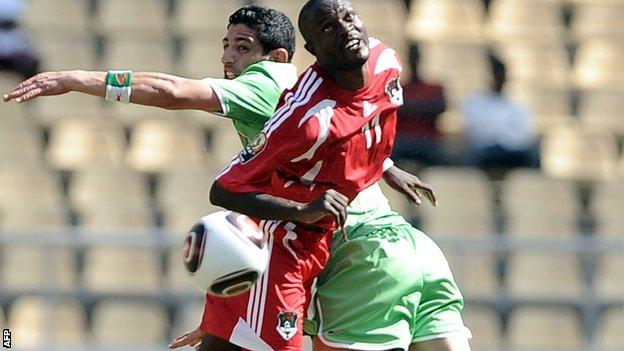 Esau Kanyenda has been recalled to the Malawi squad as they seek to overcome a 2-0 deficit against Ghana next month and qualify for the 2013 Africa Cup of Nations.

Kanyenda, 35, who last played for the Flames in a friendly against a China under-23 side in May, is the surprise inclusion in the 34-man squad.

There is also a return for fellow-forward Chiukepo Msowoya. He missed the trip to Ghana as he readjusted to life in Malawi after being released by South African club Orlando Pirates.

Malawi coach, Kinnah Phiri says he has recalled the two strikers to add firepower to his front line with the hope of upsetting the odds against the Black Stars.

In football you can score two goals in two minutes. That's the reason we are not losing hope.

"There is a need for the team to be hungry for goals," he said.

"We also need to look at the fact that we will be playing at home and need goals to qualify, that is why I have decided to recall our prominent strikers."

The pair are short of match action but Phiri insists they will be ready for the second leg, which takes place in Lilongwe on 13 October.

Phiri denied that the return of the two strikers was an act of desperation. He said: "It is something that we should have done earlier but because the players were moving up and down in search for teams, that is why they were sidelined in recent games.

"I did not discard them completely but I was giving them a chance to settle down."

Notable absentees from the squad are defenders James Sangala and Limbikani Mzava, who are suspended for the second leg. Defender Forster Namwera does return, though, having been banned for the first leg.

Despite being 2-0 down to one of the continent's strongest sides, Phiri remains hopeful that his team can spring a surprise.

He said: "I have seen teams come from three goals down in the first half to level and even win.

"In football you can score two goals in two minutes. That's the reason we are not losing hope."