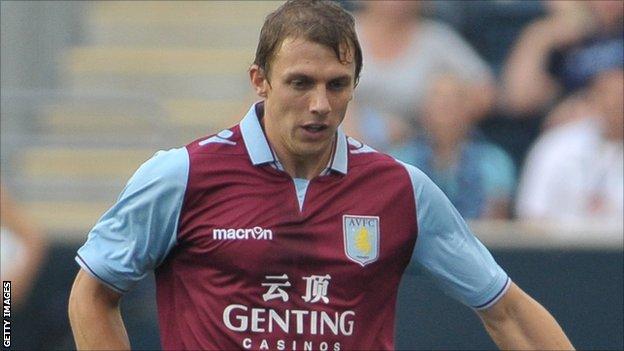 The 30-year-old has fallen out of favour with the Premier League club and has not featured in a competitive match under new Villa boss Paul Lambert.

"Stephen is a player who can play in a number of positions, which is very important in the Championship," said Bolton manager Owen Coyle.

Warnock could make his debut at Sheffield Wednesday on Saturday.

Wanderers have made a disappointing start to the Championship campaign, taking seven points from their first six matches.

Warnock began his career at Liverpool but struggled for first-team opportunities at Anfield.

He came to prominence during a two-and-a-half-year spell at Blackburn Rovers, and made his international debut for England in 2008 while at Ewood Park.

A move to Villa Park followed in 2009 and he helped Martin O'Neill's side reach the Carling Cup final in his first season at the club.

Warnock has made 104 appearances for Villa, scoring four goals, the last of which coming in a 2-1 home defeat by Bolton in April.

Coyle told the club website: "We tried to get him to the club before the summer transfer deadline but it never came to fruition, so I'm delighted that we have now been able to bring him in.

"He has a terrific pedigree and has moved for large sums of money in his career, so we know his quality.

"There was a lot of competition for his signature. We beat off a host of clubs in the Championship, so we are delighted to get him in."