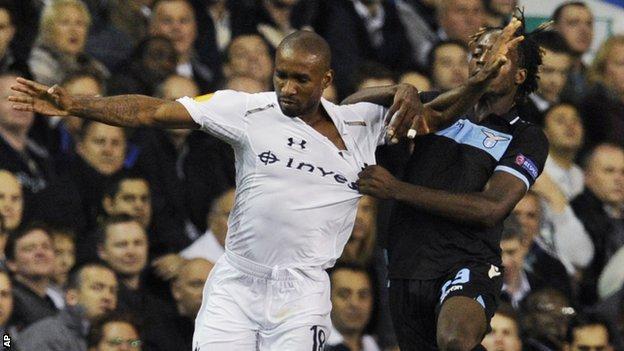 Uefa have fined Lazio 40,000 euros (£32,500) following racist chanting by their fans during a Europa League game at Tottenham last month.

Lazio have three days to appeal if they believe the findings of the Control and Disciplinary Body are unfounded.

The match ended 0-0, with Spurs having three goals ruled out.

Tottenham manager Andre Villas-Boas said he did not hear the chants during the game on 20 September, which was attended by Uefa president Michel Platini.

The sanctions have come at a bad time for Uefa as Champions League and Europa League matches next week will be used to showcase activities organised by the governing body and the equality group Football Against Racism in Europe.

Uefa has also brought disciplinary action against Serbia following what appeared to be racist chanting from their fans during the Euro 2013 Under-21 Championship play-off against England on Tuesday.

England Under-21 defender Danny Rose claims he was racially abused by fans in Krusevac and has called for Serbia to be banned.

England were also charged by Uefa over the behaviour of players at the end of the game following a mass brawl involving players and staff from both sides.

Rose has been offered support by Spurs boss Andre Villas-Boas, who said: "It's extremely difficult for Danny. He was disappointed by that happening, by the situation which he had to live with, the atmosphere he was confronted with.

"I told Daniel I support him completely in this situation. He felt abused and this is obviously a serious matter which at the moment is in the hands of both FAs."

Lazio currently top Group J after picking up four points from their first two games and host Spurs at the Stadio Olimpico on 20 November.