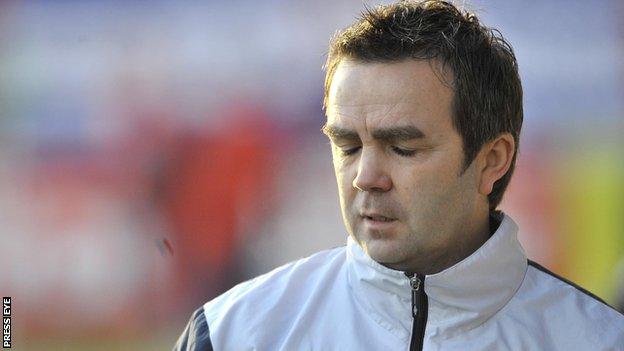 Irish League Football club Newry City FC was wound up at a High Court hearing in Belfast on Thursday.

A petition brought by former manager Gerry Flynn against the company which runs the Championship side was granted in a hearing lasting only minutes.

The Irish FA's executive board will meet to discuss the issue on Friday.

Earlier this year Mr Flynn was awarded £25,000 in damages after claiming wrongful dismissal and breach of contract against the club.

When no money was paid out he instructed his lawyers to issue winding-up proceedings against Newry City FC Ltd.

Sources close to Mr Flynn stressed that his petition was an attempt to resolve the issue rather than seeking the club's closure.

No one representing Newry City was in court for Thursday's hearing.

It is expected that the winding-up order will lead to Newry City FC Ltd now being liquidated.

Uncertainty now surrounds whether the club will be able to fulfil any fixtures without forming as a new entity.

Last month, the club's opening scheduled Championship One match was postponed because of the winding-up petition.

A week later, the club did start their campaign after offering assurances about their future to the Irish FA.

However, a month on, the club's future appears to be in huge doubt with the Irish FA confirming on Thursday evening that its executive board would meet on Friday to discuss the issue.