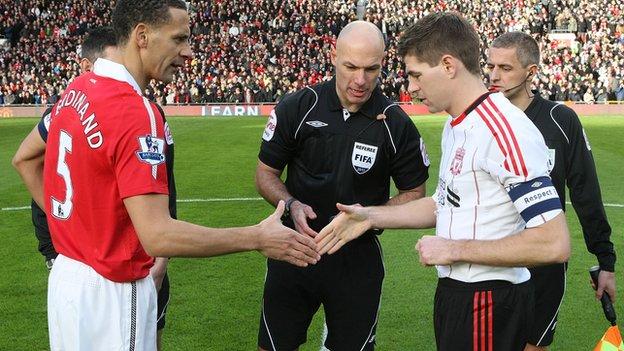 The rivalry between Liverpool and Manchester United has become almost unique in its intensity since the Premier League's balance of power shifted from Merseyside along the M62 in the early 1990s.

The two cities do not simply share a sporting rivalry but also a cultural and industrial one - something mirrored most starkly in the relationship between two of world football's greatest clubs.

Covering one of my first meetings between Liverpool and United at Anfield in 1988 I got a close up view of then manager Kenny Dalglish carrying his six-week old daughter Lauren in his arms while enraging counterpart Sir Alex Ferguson in the tunnel by suggesting a radio interviewer might get more sense interrogating the baby than his fellow Scot.

It was a snapshot of the fierce competition that has always existed between Liverpool and United but the incident now falls into the category of mild banter given what has become, and few would dispute this, an increasingly poisonous relationship between the supporters in recent years.

Tension has built as United have amassed league titles - eventually eclipsing Liverpool's 18 top-flight trophies with their 19th in 2011.

The rivalry has led to concerns that what should be an occasion for remembrance, emotion and sympathy when they meet in the Premier League at Anfield on Sunday - as Liverpool play at home for the first time since the release of the Hillsborough files - might be hijacked by a small minority intent on ill-feeling as opposed to empathy.

And yet the actions of both clubs in the build-up to Sunday's game suggests this day could yet be a watershed in that fractious relationship between fans, a day when the unity that has been shown within football following the disclosure of the Hillsborough documents relating to the 1989 disaster could heal long-standing wounds.

This will be the wish of the overwhelming majority of Liverpool and United supporters inside and outside Anfield, and those in the boardrooms, at these two English and European superpowers.

As those who died at the FA Cup semi-final between Liverpool and Nottingham Forest in 1989 are remembered on Sunday, the occasion has the potential to become a turning point, a force for good in forging a new bond between the clubs' followers.

BBC Sport football pundit Mark Lawrenson, who played in many Liverpool-Manchester United matches, says the eyes of the sporting world will be on Anfield on Sunday.

"This is Liverpool's first game at home since the release of the Hillsborough files and no-one wants anything to detract from the meaning of this occasion followed by the importance of a showpiece Premier League game," he said.

"Concerns have been expressed after a small number of United fans sang anti-Liverpool songs during last week's win against Wigan but I fully expect this to be a day reflecting the mood of so many decent supporters on both sides.

"Liverpool fans have been guilty themselves in the past of singing songs about the Munich air crash but Hillsborough rises above club loyalties.

"I also think anyone who is tempted to try to mar the occasion will find themselves being embarrassed by their fellow supporters.

"And with plans for opposing before kick-off in memory of those who died in 1989, I am convinced it will be a day that will do everyone inside Anfield enormous credit.

"It may even be the time when fractures in the relationship between the two sets of supporters are repaired.

"United and Liverpool have suffered great tragedies as clubs so there should be empathy between them. It is these tragic events and how they have handled them that contribute to their greatness. They are part of these clubs' history so there should be that mutual respect.

"Sir Alex Ferguson has very publicly offered United's support to Liverpool. He will stand alongside Liverpool because this is not an issue of club loyalty or a time for rivalries. Hillsborough goes beyond that."

Manchester United manager Sir Alex Ferguson, who will take charge of his 62nd match against Liverpool on Sunday, admits that the rivalry between the cities goes back a long way further than football.

The building of the Manchester ship canal in the 1880s is often cited as the source of that historic discontent. The canal bypassed the Port of Liverpool, leading to job losses on Merseyside and disgruntlement with the new competition - it is mentioned still on the Mersey Ferry tour.

Ferguson said: "The thing about us and Liverpool is the rivalry. They are the most fantastic games.

"They're unparalleled in British history in terms of the success of both clubs and that's why we need each other. From an industrial point of view, the way industry changed when they opened the ship canal - [the rivalry] is all to do with it."

Football is so important in north-west daily life that the broader culture can be infected.

Music is an example of that - while the Beatles struck the first telling blow for Liverpool, Manchester hit back with the likes of Joy Division, New Order, the Smiths, the Stone Roses and Oasis. And yet this is a rivalry that lives in football and was fuelled by modern success, first Liverpool's, then United's.

It is striking that Phil Chisnall, who left Old Trafford for Anfield in 1964, remains the last player to be transferred directly between the clubs. As with music, civic and cultural achievements, success in football has been cyclical from the moment United won the European Cup in 1968.

At the time, the Liverpool Echo wrote: "British football can be proud of the United team who gave their all to give Matt Busby the cup he cherishes above all else. It's been a long, long drive for United to reach the top in Europe - no-one will begrudge them being the first English club to make it."

How times change. In 2005, when the Manchester Evening News reported Liverpool's Champions League triumph in Istanbul with the headline "Beyond Belief", the paper was inundated with complaints.

The eyes of the footballing world will be on Anfield on Sunday. Hopefully, the rivalry can be a respectful one.