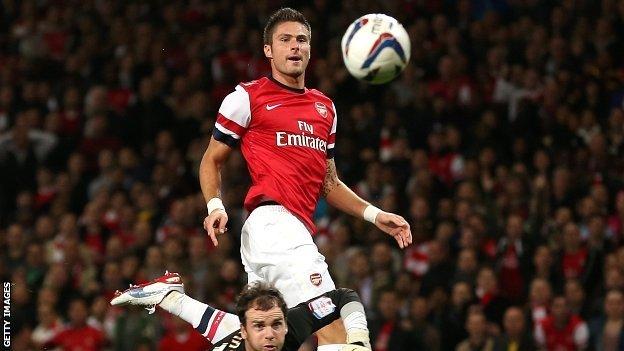 Olivier Giroud scored his first goal for Arsenal as the Gunners put six past Coventry to book a Capital One Cup fourth round visit to Reading.

Giroud latched on to Francis Coquelin's pass to open the scoring, but the French striker then missed a penalty.

Theo Walcott grabbed the first of two goals before Callum Ball replied for the visitors as Ignasi Miquel added to a convincing Gunners victory.

Chances were limited for League One strugglers Coventry, who have only tasted victory in the two previous League Cup rounds this season.

But new boss Mark Robins would have been impressed by a first-half performance where Stephen Elliott went closest to opening the scoring when his header flew wide following Franck Moussa's teasing cross.

The victory for Arsenal maintained their unbeaten start to the season, while there were significant returns for Arshavin, who made his first start since January, and Emmanuel Frimpong following a bad knee injury last season.

Having handed debuts to Moussa and James Bailey, Robins watched as Richard Wood fired over on the half-hour mark but, once Giroud had a sighter, the former Montpellier frontman beat the offside trap before the break to steer past Sky Blues keeper Joe Murphy.

Giroud's chances of then doubling the lead and his season's tally were thwarted when Murphy saved his penalty when he stooped low to his right after Reece Brown had brought down Arshavin.

Arsenal forward Giroud, 25, was not helped when a pitch invader caused a delay to him taking the the spot-kick and a frenetic period continued when Miquel crashed a header against the crossbar following Murphy's save.

After Wood went close with another header, Oxlade-Chamberlain established a measure of control when the teenager collected Arshavin's pass to fire in from 25 yards.

Arshavin, who spent the second half of last season on loan at Zenit St Petersburg, got on the scoresheet by chesting the ball down and firing in for his first goal of the season.

Arsenal's Nico Yennaris was a mascot the last time the Gunners hosted Coventry 12 years ago, and he set Walcott free to make it 4-0.

Ball gave Coventry something to show for their efforts on 78 minutes, but two minutes later Miquel finished before Walcott added a second, and his third of the season, in the last minute.

Arsenal manager Arsene Wenger: "I think we did our job, in the first half we were tested defensively mainly, in the second half our offensive potential made the difference when they tired a little bit.

"From then on of course you had Andrey Arshavin, Theo Walcott, Alex Oxlade-Chamberlain and Olivier Giroud who were always a threat and the difference of quality had a big impact on the result in the end."

Coventry manager Mark Robins: "I think for us it is easy to be hypercritical but it is difficult to be that when you are playing one of the best teams in Europe - regardless of the players he has put on the field, they are quality players.

"It is disappointing to lose the six goals, there is a danger that you look at it and think that is acceptable, that isn't acceptable but it is building it up.

"We ran out of legs and that is something we have got to work on."