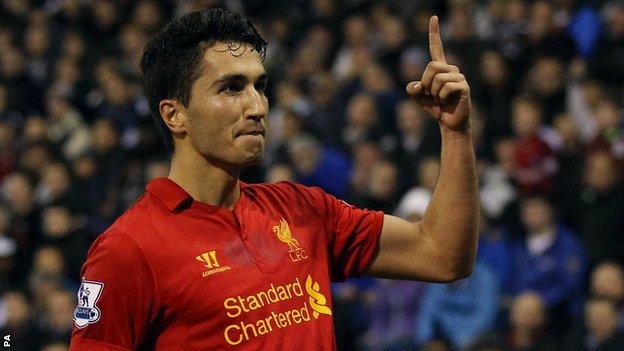 Nuri Sahin struck a late winner as holders Liverpool beat West Brom in the third round of the Capital One Cup.

The Reds went behind early in the game when keeper Brad Jones dropped a free-kick and Gabriel Tamas drove in a shot.

Sahin levelled when his strike squirmed under keeper Ben Foster, before striker Jerome Sinclair, 16, came on to become Liverpool's youngest ever player.

The visitors then produced a well-worked move with winger Oussama Assaidi crossing for Sahin to tap in a winner.

The victory will provide Liverpool manager Brendan Rodgers, who will welcome former club Swansea to Anfield in the next round, with plenty of encouragement after he sent out a youthful side to begin the defence of the trophy they won last season.

And the introduction of Sinclair, who only celebrated his 16th birthday six days ago, after 82 minutes created a watershed moment in the Reds history as he replaced Jack Robinson as the club's youngest ever player.

Robinson, who made his debut for the Merseysiders at 16 years and 250 days, was part of Liverpool's starting line-up at The Hawthorns and epitomised the youthful look of the visitors' team.

Rodgers made 11 changes from Sunday's Premier League defeat by Manchester United, highlighting his main focus is Saturday's game against Norwich as his side chase a first top-flight win of the season.

The league campaign began badly for Rodgers when his side were beaten 3-0 by West Brom in August, as the Northern Irishman was handed a defeat in his first competitive game in charge of the Merseysiders.

His return to the Midlands club did not start well either as the Baggies took the lead when Jones dropped Liam Ridgewell's free-kick and Tamas gratefully drove a shot into the net from just inside the area.

The visitors were wobbling and Romelu Lukaku had a shot deflected wide before cutting the ball back for fellow striker Markus Rosenborg, whose effort was saved by Jones at the near post.

Liverpool gradually settled with Moroccan winger Assaidi using his pace and trickery to provide the visitors with an incisive threat on the left wing.

One particular jinking run ended with a cross to the near post where 19-year-old debutant Samed Yesil glanced a header wide.

Another goalkeeping mistake let Liverpool back into the match when Foster should have done better than let Sahin's well-struck left-foot strike sneak past him.

It was the Turkish international midfielder's first goal for the Reds since he joined on loan from Real Madrid in the summer and the effort helped the Reds grow in confidence.

Yesil almost benefited from another Foster error when the Baggies keeper misjudged the flight of the forward's shot and was fortunate when his blocked save bounced behind him and over the crossbar.

A dipping shot from Liverpool striker Daniel Pacheco skimmed the crossbar before West Brom responded with a Rosenborg sidefooted effort being saved.

Both sides carried a threat but it was Liverpool who provided the quality to engineer a winner.

Substitute Suso ran at the Baggies defence and spread the ball to Assaidi, whose low first-time cross was met with a simple finish by Sahin.