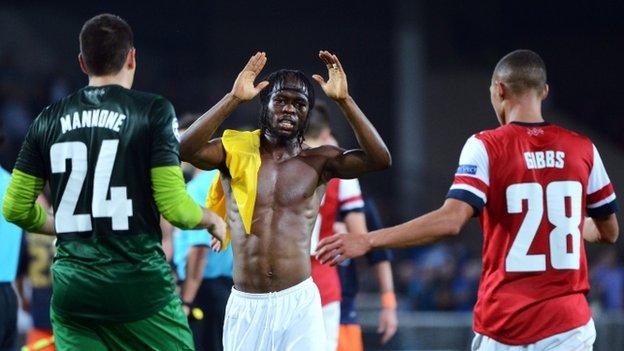 I am not sure I enjoyed it. I have got a headache and a half

With manager Arsene Wenger confined to the stands because of a Uefa touchline ban, Bould took charge.

Arsenal fell behind to an early penalty but two goals in three minutes turned the game, despite the French team dominating the second half.

"We've got great team spirit. I think that was evident tonight," Bould said.

"Everybody is digging in and things are looking OK."

Arsenal came into the game having not been behind in a match this season. But Thomas Vermaelen's clumsy challenge allowed Younes Belhanda to put Montpellier in front from the penalty spot after nine minutes.

Montpellier improved after the break with Remi Cabella hitting the crossbar, Belhanda missing one clear chance and being denied a late penalty after going down under Abou Diaby's challenge.

Bould steps into the breach

When asked if he had enjoyed the added responsibility, having been promoted from his role as the Under-18 academy coach in the summer, Bould said: "I am not sure I enjoyed it. I have got a headache and a half.

"It is tough, a different pressure than I have been used to taking the Under-18s, but we won and we had a great result."

Bould admitted Arsenal looked jaded in the second half but said the result was all that mattered.

"It was difficult. I thought we were excellent in the first half - we kept the ball and kept the crowd quiet," he added

"We looked a little tired in the second half because it was very humid and the crowd got behind them. It is quite an intimidating place to come and play, so we are glad to get the result.

"We have had a decent start to the season and we have kept the run going, so it's important all round, for the whole season."

Bould also praised Podolski, who has scored three goals in as many games. "He has made a real impact," Bould said.

"I have to say I've not seen many finishers as good as him - ever, right foot, left foot, they always go in at 100 miles per hour in training. He is a good trainer, a good boy and has really added something this year."