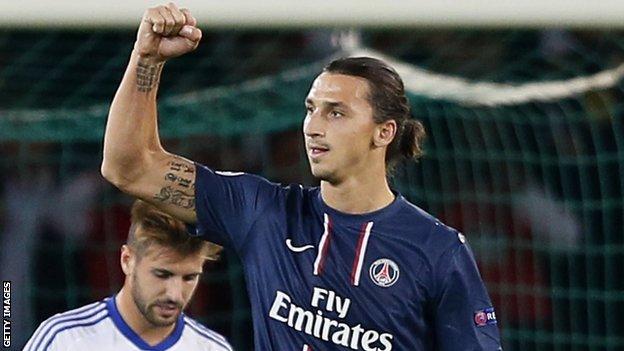 Big-spending Paris St Germain got off to a winning start in the Champions League as AC Milan were surprisingly held to a goalless draw at home.

French club PSG eased to a 4-1 win over Dynamo Kiev, with Zlatan Ibrahimovic setting them on the road to victory.

It is very important to win the first game. We played a very good game, with a lot of intensity

There were also wins for Borussia Dortmund, Porto, Malaga and Schalke as they beat Ajax, Dinamo Zagreb, Zenit St Petersburg and Olympiakos respectively.

Milan struggled against Anderlecht as their match ended goalless.

Thiago Silva, Alex and Javier Pastore got their other goals, while Miguel Veloso netted for Ukrainians Dynamo Kiev.

Portuguese outfit Porto were also comfortable winners as Lucho Gonzalez tapped in and Steven Defour drove in a late shot to give them three points against Croatian club Dinamo Zagreb.

Arsenal were 2-1 victors over Montpellier, while German club Schalke achieved victory by the same score as they won at Greek club Olympiakos.

Huntelaar struck the post with a spot-kick but Olympiakos did not have enough to punish the Bundesliga side for the miss.

Malaga marked their Champions League debut with an impressive 3-0 win over Russian outfit Zenit St Petersburg, who had summer forward signing Hulk making his first start for them.

Isco Alarcon scored twice for the Spanish side with Javier Saviola also getting on the scoresheet for the group's early pacesetters.

AC Milan struggled on the way to being held by Belgian club Anderlecht.

It is the third game on the trot that the Italian side have failed to score at the San Siro.

Real Madrid came out on top of a pulsating 3-2 victory over Manchester City, while Borussia Dortmund edged past Ajax.

Dortmund's Mats Hummels had a penalty saved by Ajax keeper Kenneth Vermeer but his blushes were saved when striker Robert Lewandowski struck with three minutes to go in front of a crowd of more than 65,000 at the Westfalenstadion.