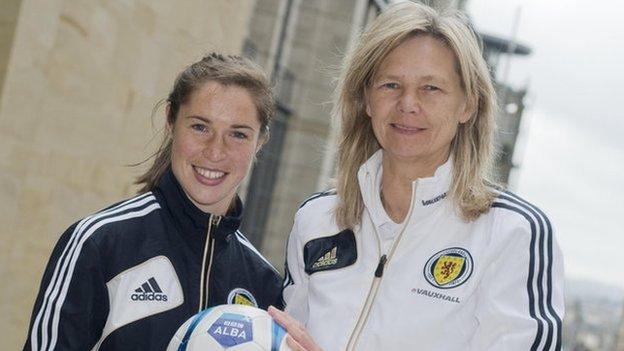 Coverage of the match between the top two sides in Group 4 from Tynecastle Stadium, Edinburgh, starts at 1700 BST.

France have already qualified for the finals after securing their place with a 4-0 win over Republic of Ireland.

Anna Signeul's Scots are already assured of a play-off place as runners-up after their 2-1 win away to Wales at the weekend.

The Scots will be hoping to improve on their last meeting with Bruno Bini's side - a 2-0 defeat in Le Havre in March - as the French look to continue their 100% record in the group.

The match will be presented by Calum Macaulay, who will be joined for trackside analysis by Scotland defender Ifeome Dieke, who suffered a long-term injury playing for Team GB at the London Olympics.