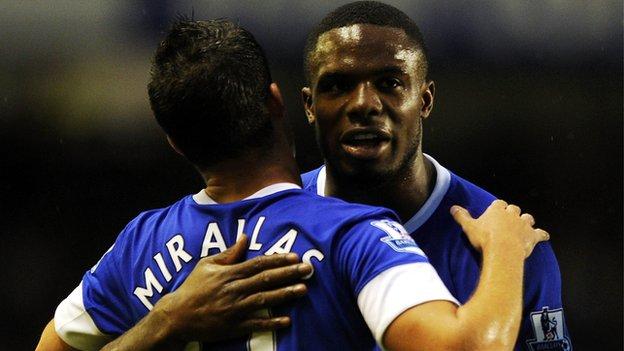 Nigerian forward Victor Anichebe has revealed he is analysing his fellow Everton strikers Nikica Jelavic and Kevin Mirallas in order to improve.

The 24-year-old scored in Monday's 2-2 draw with Newcastle after replacing injured Jelavic - and had a late goal controversially ruled out.

And Anichebe insists he can still learn a lot from his experienced colleagues.

"It is always nice to play and watch these kind of players as I am still learning," he said.

"It is nice for me to learn off Niki as he plays as that lone striker and he's a great player. He plays between the centre-halves and that's what I'm trying to do more instead of dropping off.

"Kevin had some good cameo runs and he is one of those players who always wants to do something on the ball. He is a really good player and we now have great options."

Anichebe may find his first-team chances limited by the form of Croatia international Jelavic, who injured a knee clattering into a post, and the summer arrivals of Steven Naismith and Mirallas, who has already impressed, but he remains upbeat.

"I am always happy just to be on the pitch as I've had some injuries in my time," he said.

Of his goal, Anichebe revealed that it was reward for hard work on the training ground.

"I've been working on that kind of turn and shot so I was happy with that - but I'd have been happier with a win," he said.

And he was philosophical about not being awarded a goal earlier when the ball bounced down off the underside of the crossbar and went over the line before Mike Williamson cleared.

"Sometimes these things go against you but hopefully as the season goes on we'll get some luck," Anichebe added.