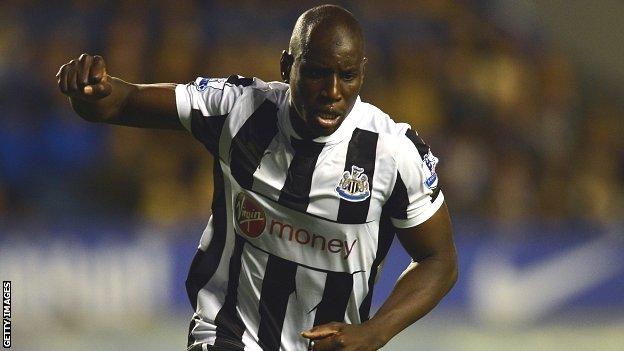 Demba Ba's agent says that his client "does not understand the management" of Newcastle after starting the 2-2 draw with Everton on the bench.

The 27-year-old forward came on to score both his side's goals, saying later he was unhappy at being named as a substitute by manager Alan Pardew.

"Since returning from the Africa Cup of Nations, Demba doesn't understand the management," said Alex Gontran.

"If he continues to be a substitute all season, we'll look at other solutions."

After Ba was named on the bench, but before his introduction to the action at Goodison Park, his brother Hamady wrote on Twitter that manager Pardew was "crazy" for leaving him out.

"Demba is happy at Newcastle. He is playing in the Premier League, with lot of fellow French speakers and he loves the club's supporters," Gontran told BBC Sport.

"He would like to start every game but he respects the choice of the coach, even if he does not always understand or agree."

"The manager has got to do what's right for Newcastle and if that means playing five in midfield and Ba has to be sacrificed, then so be it. Players have to look at the wider picture. Alan Pardew will have known he'll have upset Ba for not playing him but he'll also have upset Sylvain Marveaux for replacing him at half time.

"But Pardew is paid for making those decisions and the players, when given an opportunity, have got to take it. Ba, who probably wasn't happy, has come on and scored the two goals and will probably start against Norwich.

"The onus is now on Ba to come out and clarify this situation."

Pardew claimed after the draw that he could not keep everyone in his squad happy and that "sometimes players play better when they're angry".

Ba has started all three of Newcastle's previous Premier League games, but has been regularly deployed on the left since fellow Senegal international Papiss Demba Cisse was signed from Freiberg in January.

After scoring 15 goals in 19 Premier League games prior to the Africa Cup of Nations and Cisse's arrival on Tyneside, Ba found the net just once in his remaining 15 club matches in the 2011-12 campaign.

"How could you put your best striker with full confidence on the left wing?" added Gontran.

"The choice to put Demba on the left last season was good for the club, because Cisse scored 13 goals.

"But there was a lack of recognition for Demba. It is more difficult to play well when you don't have the confidence of your staff."

Speculation linking Ba with a move away from Newcastle in the last two transfer windows was fuelled by a now-expired release clause in his contract that would be triggered by a bid of about £7.5m.