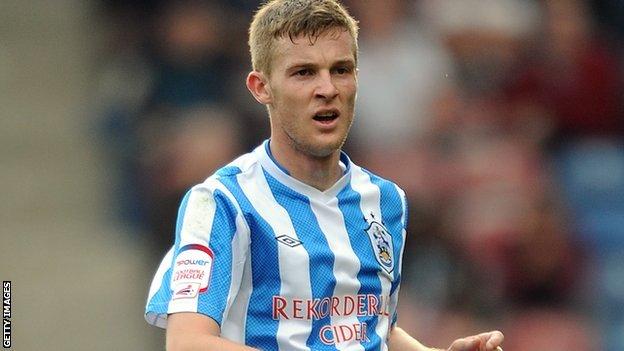 Huddersfield Town full-back Paul Dixon says the team will have to adapt to life without striker Jordan Rhodes.

The Terriers have picked up four points in two games since Rhodes joined Blackburn for £8m.

"You just have to get on with it and adapt because you can't dwell on players who used to be here," he told BBC Radio Leeds.

"There are still good strikers at this club so we just need to give them the supply to get the goals."

Dixon has impressed at the John Smith's Stadium since joining from Dundee United in the summer and made his first two appearances for Scotland in their recent internationals.

He is confident he has joined a tougher competition in moving to the Championship from the Scottish Premier League.

"I believe it is a step up, no disrespect to Scottish football but that's why I came here," he added.

"I wanted to progress myself as a player and I think I have definitely done that by coming here."

The former Dundee man has been buoyed by his call-up to the national side.

Dixon played both games as Craig Levein's side started their World Cup campaign with home draws against Serbia and Macedonia.

"It's been a dream come true because every young boy who wants to be a footballer wants to play for his country," he continued

"I was pleased with my performances because it is the peak of football.

"When you look at it we're unbeaten and that's the most important thing. We set out to win both games and if you look at the amount of chances we created I think you can see that."