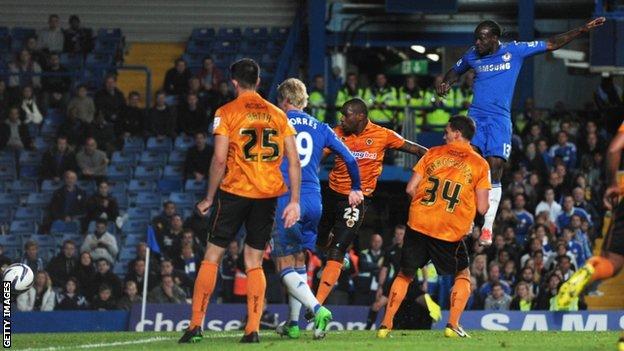 Chelsea produced a ruthless display to thrash Wolves and progress to the fourth round of the Capital One Cup as skipper John Terry returned to action.

Three goals in the first 16 minutes set the tone before Oriol Romeu, Fernando Torres and Victor Moses found the net.

Gary Cahill opened the scoring with a header, before Ryan Bertrand and Juan Mata added two more before half-time.

Romeu then scored a penalty, Torres netted a header and Moses added the sixth from substitute Oscar's cross.

Having spent the morning at Wembley defending himself against an FA charge of misconduct, Terry captained the side and enjoyed some respite in front of his adoring fans.

The Chelsea captain was a virtual spectator as he was treated to his side's biggest win for almost two years as Stamford Bridge serenaded him with chants of "there's only one England captain," some 48 hours after he announced his retirement from international football.

Chelsea gave debuts to Cesar Azpilicueta and Lucas Piazon, while Wolves opted to rest 10 players and were behind after four minutes when Cahill stooped to head in Juan Mata's free kick at the far post.

Chelsea on the march

Chelsea's youngsters, who looked lively throughout, then combined for the second goal in the seventh minute. Romeu's shot was saved by Wolves goalkeeper Dorus De Vries but Piazon kept the ball alive and turned it back for an unmarked Bertrand to blast home.

The third goal was an exhibition from the established stars in the team, Mata starting and finishing a flowing move, exchanging passes with both Ramires and Torres before finishing expertly.

It was not all plain sailing for Chelsea, however. First David Davis saw his strike tipped over before Slawomir Peszko surged clear of Terry and Cahill and rounded Ross Turnbull before shooting into the side netting.

Chelsea maintained their momentum after the interval when De Vries brought Moses down, allowing Romeu to score his first goal for the club from the penalty spot.

Torres got in on the act when he powered home a 58th-minute header from Mata's corner before Oscar crossed for Moses to power home his first Chelsea goal on his full debut with 19 minutes remaining to complete a perfect night for Roberto di Matteo's side.

"This was a very impressive win. What most impressed was that the boys stuck to task and did the things the right way. It is very easy to get casual when you go two or three up early on but the boys didn't and they continued through to the end.

"It was pleasing to be able to rotate the squad as much as we did and still field a very strong side. It is about having a squad capable of challenging on all four fronts.

"We are not worried about putting markers down for anybody, it is about taking care of business and doing the best that we can do."

"Obviously we had thought about this a lot before doing it [making 10 changes for the game].

"There was a risk that something like this could happen but we were punished at the beginning of the game with a soft set piece goal. Then came another goal and obviously that made it hard for the young boys in the team.

"There is no one else to blame but me and it is a calculated risk that I would do again because we have had three games in six days and have got three games in seven coming up."