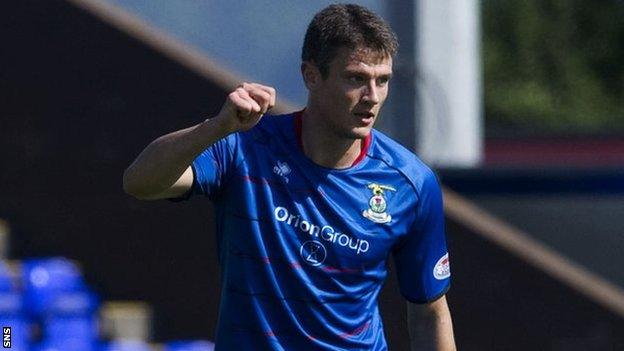 Inverness Caledonian Thistle will not launch an appeal against the red card shown to Owain Tudur Jones as they say the process is too expensive.

So the midfielder will now serve his second two-game ban of the season after his foul on Aberdeen's Ryan Fraser.

Manager Terry Butcher said: "This isn't because we think the red card was fair, because we certainly don't.

"But it doesn't make sense for the club to spend £1,000 on an appeal when the odds are stacked against us."

Tudur Jones, who has now played five times for Caley Thistle this season, was also sent off in his only other appearance in front of his own fans this term, a 1-1 draw with Kilmarnock.

The 27-year-old Wales international will miss this weekend's game with Hibernian at Easter Road - and the Scottish Communities League Cup tie away to Stenhousemuir.

Despite being down to 10 men on Saturday, Caley Thistle took the lead through a Richie Foran penalty, the concession of which led to Aberdeen's Russell Anderson also being shown a red card.

Cammy Smith equalised for the Dons and, immediately after the game, Butcher heavily criticised referee George Salmond for not awarding his side a second penalty and for showing Tudur Jones a red card.

Aberdeen say they will appeal against the red card shown to Anderson, a decision the Caley Thistle manager thought Salmond got right, but Inverness will not go through the same process on behalf of their own player.

"After giving the matter a great deal of thought, we have decided against lodging an appeal against Owain's sending-off," Butcher told his club website.

"We would have to prove the referee guilty of making a mistake rather than simply defending the innocence of our player.

"This procedure has worked against us in the past. Last season, we appealed four times and only once, Greg Tansey against Celtic, was it upheld.

"The whole appeal process is far from ideal and, taking all things into consideration, we now accept that Owain must serve his suspension."